O’zapft is! This means thousands of visitors from near and far are coming to Oktoberfest (or Wiesn as we say) in Munich; most of them are wearing Dirndl and Lederhose. Because this is tradition, or? No, actually not. Wearing Dirndl and Lederhose to the Oktoberfest is a quite new phenomenon. Furthermore, the Dirndl isn’t as old and traditional as you might think. And while fashion boutiques of all price ranges make their extra profit from “the traditional Bavarian dress”, I’m going to tell you the story of the Dirndl. I’m sure you will be surprised!

To understand the story of the Dirndl, it makes sense to focus on the Bavarian Tracht first. Disclaimer: There is a lot to say about the Bavarian Tracht, but I try to only focus on the most important points. Another disclaimer: Wearing Dirndl and Lederhose is a Bavarian phenomenon and not a German phenomenon. I wanted to make this clear, as I know that most of the people from other countries associate Dirndl and Lederhose with Germany in general. 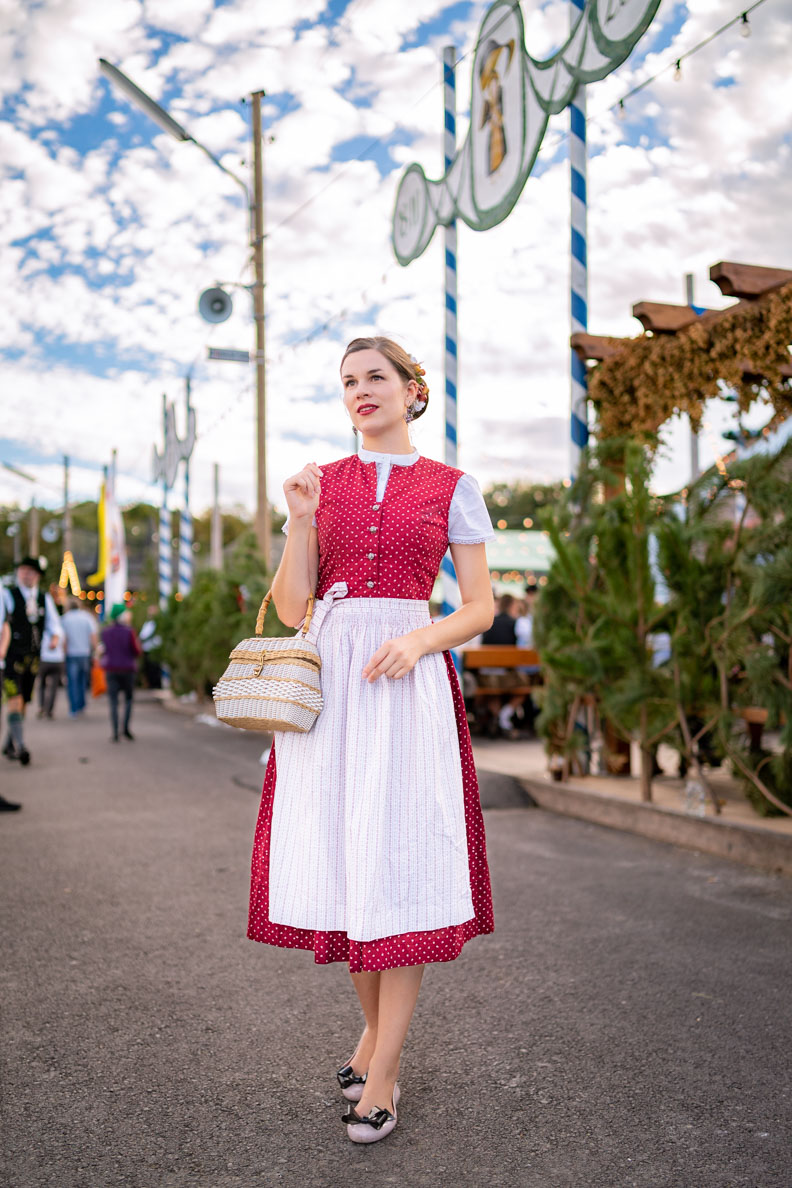 Dirndl and Bavarian Tracht – is that the same?

Dirndl, Tracht, is that the same? No, it’s not that easy.

The term Tracht can be translated as traditional clothing. In Germany, we nowadays use it as a term for the clothes of the rural population with regional and temporal differences, that shows the social status. Within its boundaries, Tracht changes with occasions (mourning, for example).

However, originally, it simply meant the wearing of clothes or the worn clothes itself. The term Bavarian Tracht (for simplicity I only write Tracht or Trachten (pl.) in the following) mainly is associated with the Dirndl for women and the Lederhose for men. These kind of costumes are inspired by the clothes the Bavarian mountain troopers wore. But more on that later. 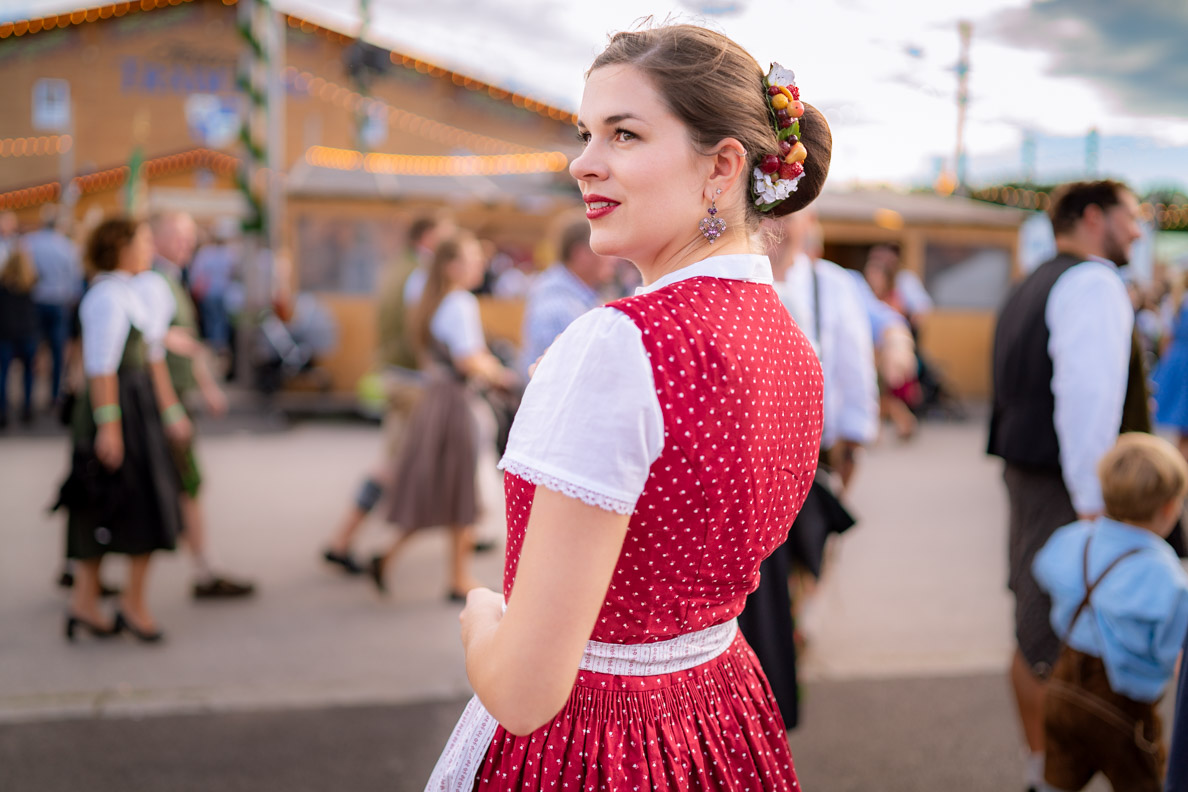 The Bavarian Tracht: A smart Marketing Strategy from the Wittelsbachers

During the first Oktoberfest in 1810, king Max I. Joseph invited children in “traditional clothes” (Trachten), every child should represent a different region of Bavaria, that were Franken, Schwaben, Pfalz and Bayern. However, as there didn’t exist a region specific traditional costume, they had to be designed for this occasion.

On the occasion of the silver wedding anniversary of king Ludwig I from Bavaria and Queen Therese, the first Trachtenumzug (a parade with folk music and where the participants are dressed in traditional customs) took place. Nevertheless, King Max II was the one who was responsible for a real Trachten boom in the middle of the 19th century. He was the one who promoted Trachten even with a decree to strengthen the national identity. However, those Trachten were specifically designed clothes without a historical background. But of course they took inspiration from clothes that were worn during this time, like the lederhose of the hutsman.

All in all, this means that the Bavarian Tracht as we know it today is only about 150 years old and a great marketing strategy of the Wittelsbachers. They knew how to creat an impressing branding for Bavaria that is still in our minds.

When in 1871, the German Empire was founded, most of the inhabitants of Bavaria felt more like Bavarians than Germans, so it seems like the marketing strategy of the Wittelsbacher was successful. In this time, there was a stronger focus on the homeland (we say “Heimat” which is a bit hard to translate as it means more than just the country or place where you are born) with the result that “Trachtenvereine” and “Heimatvereine” (associations that focus on traditional values and clothes) were established. 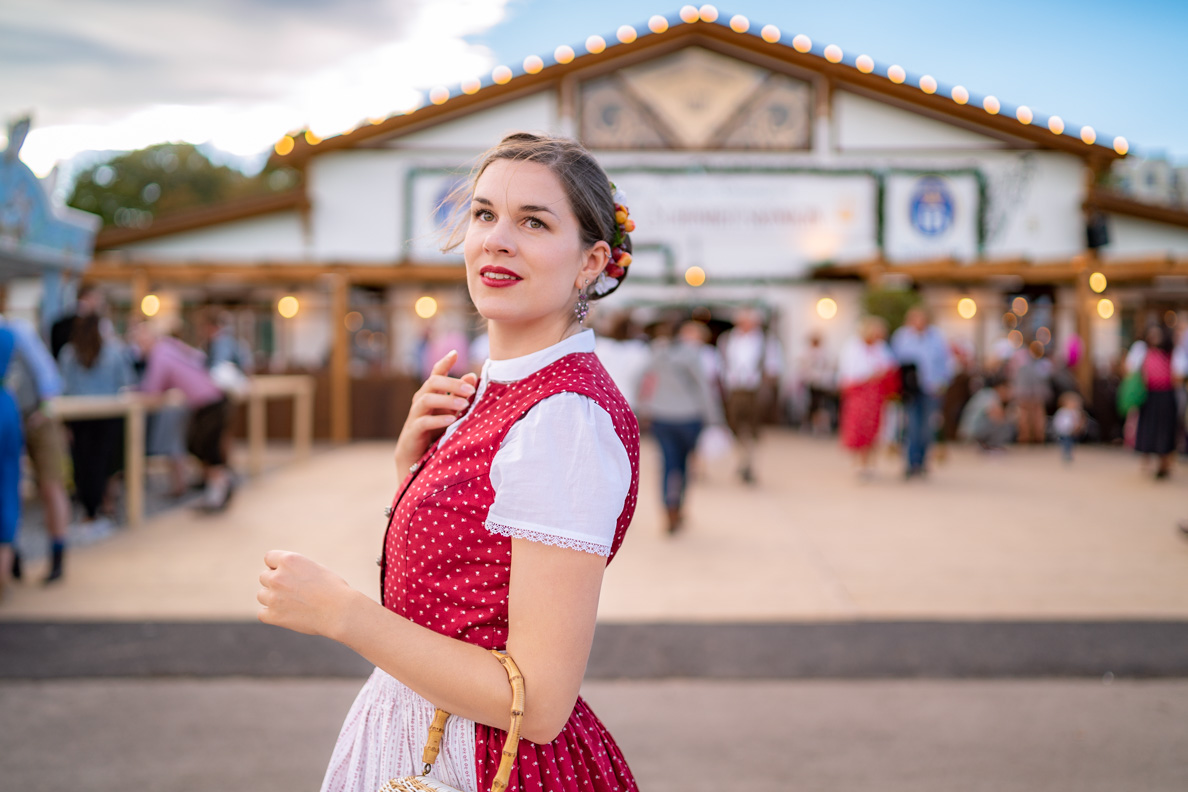 Today, Trachten follow rules like the way how the apron of a woman’s Tracht is tied (bow on the left means single, on the right means married/in a realtionship, bow in the middle of the apron means the wearer is a virgin, and bow at the back means widowed). Furthermore, the end of the 19th century was the time when Trachten got their regional specific characteristics. 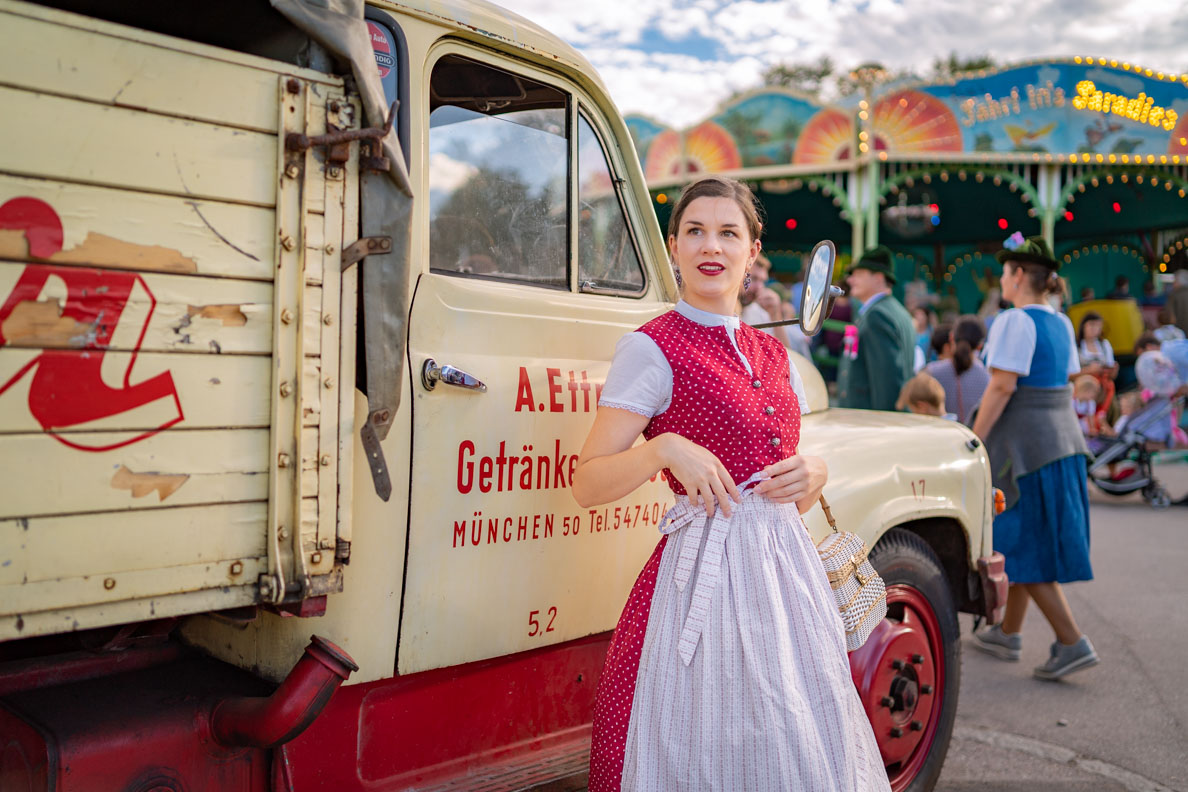 Trachten experienced another boom at the end of the 19th and the beginning of the 20th century, when the wealthy population from the cities and other regions came to the alpine region, this phenomenon was called “Sommerfrische“. Tourists expected Bavarians in Tracht, therefore the Bavarians who earned their money with tourism dressed this way. The opulent and expensive clothes of the wealthy population became quickly impractical for a vacation in the countryside and so the Dirndl was born.

The Story of the Dirndl

Before diving deeper into the story of the Dirndl, I want to tell you the conceptual foundations and some background information.

Dindl is a form of Dirn which means jung girl or maid in Bavaria and Austria. The clothes they wore was called Drindlgwand (Gwand = garment), over the time, Dirndlgwand got shortened to Dirndl.

As mentioned before, the Dirndl occured at the end of the 19th century. When the wealthy ladies from the cities came to the Bavarian countryside, they needed more pracitcal dresses that suited the occasion. The hard country life got romanticised and women wanted something that reflects the countrysidedyll.

Inspiration for this new summer dress were the garments the maids wore. Their clothes usually consisted of a blouse, a kind of loose dress made of cotton or linen and an apron made of old fabrics or rags. This was practical and a good workwear.

This kind of clothing got adjusted for the high demands of the wealthy ladies. However, some details remained: The apron (made of high-quality fabrics and not of rags, though), the darts, braids, and tucks.

So de facto, the Dirndl was a summer dress for the wealthy ladies from the city and not a traditional dress of the rural population. Futhermore, it was not common to wear a Dirndl in the city. 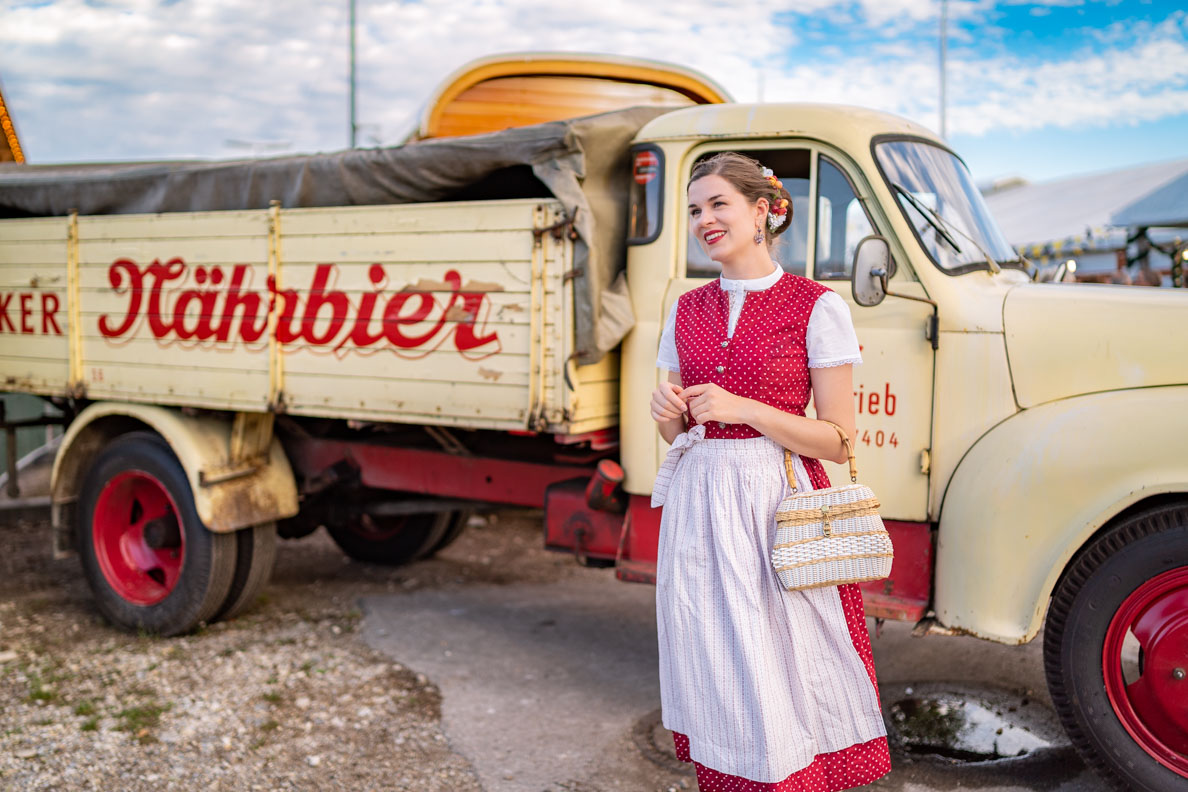 How did the Dirndl came to the City?

The Jewish brothers Wallach founded the first boutique in Munich which sold Dirndls and Trachten in 1900 and therefore brought the Tracht to the city.

After world war one, Trachten became popular again, as people focused more on old traditions and values. When right-wing politicians started to misuse the homeland association of Trachten, the context of Trachten changed.

Dirndl and Tracht during NS era

The picture of respectable, patriotic workers in Tracht fit good into their propaganda. They tried to standardise the different Trachten and even showed themselves in Trachten. 1938, the boutique of the Wallach brothers fell victim to Aryanisation. In some regions, it was forbidden for Jews to wear Trachten.

Also the appearance of the Drindl changed during NS era. In the 1930s Gertud Pesendorfer designed a new German Tracht. The hemline of the Dirndl got shorter, the long sleeves disappeared, the neckline got deeper and even the emphasised waist has its roots in this time. This, by the way, is the kind of Dirndl we see at Oktoberfest most of the time. (The topic fashion during NS era is a different chapter. Maybe I’m going to focus on this in another blogpost.)

When doing some research about the Dirndl, you mostly don’t find that much information about this last point. However, I think it’s very important to keep that in mind. Especially in this day and age.

After World War II, there were times when Dirndl and Tracht were very popular, and times when they were seen as old-fashioned. By now, Trachten and Dirndl experience a boom, again. Not only Bavarians wear them, but also tourists when they visit Oktoberfest, which leads us to the next point. 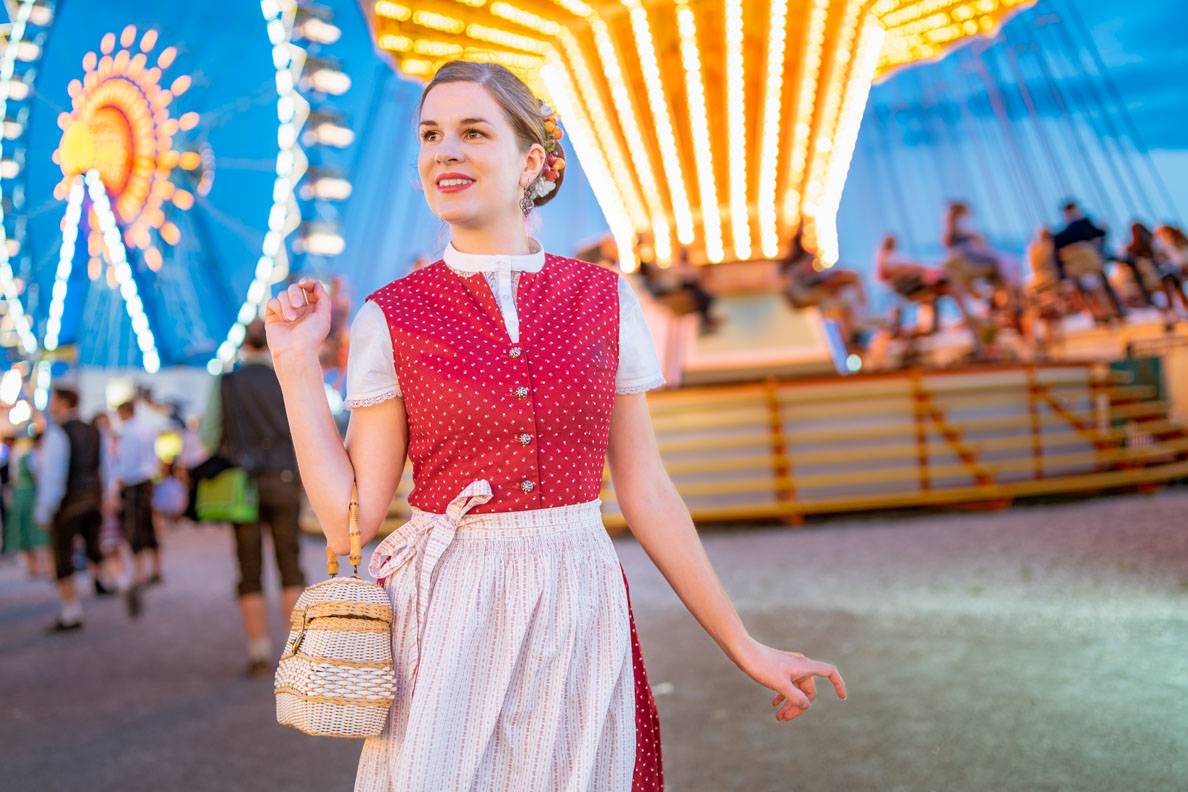 Dirndl and Oktoberfest are related, or?

Most of the people think (even Bavarians!) that it’s absolutely traditional to wear Dirndl and Lederhose at the Oktoberfest. Especially in the last few years, more and more people from all over the world dress themselves in those clothes. To figure out if Dirndl and Oktoberfest are related, we have to have a look at the history of the Oktoberfest.

The History of the Oktoberfest

The truth is, when the first Oktoberfest took place on October, 17 in 1810 to celebrate to marriage of crown prince Ludwig and princess Therese, the Dirndl did not even exist (as we learned before, it has its roots at the end of the 19th century). Instead of Trachten, the visitors wore their festive clothing and this was mostly fashion from France.

At the end of the 19th century, the first Trachtenvereine (you know, the associations that focus on traditional values and clothes) performed at Oktoberfest to amuse the guests. However, it was still not fashionable for visitors to wear Dirndl or Tracht at the Oktoberfest.

But how did the Dirndl get such a must-have for Oktoberfest? This was actually another smart marketing strategy of Munich. When the city applied for the Olympic Games in 1972, they needed a unique symbol that represents Munich. The idea: Pretty girls in posh Dirndls.

By now, “the traditional Bavarian dress” is fashionable again. We will see, how long this trend will stay. 😉 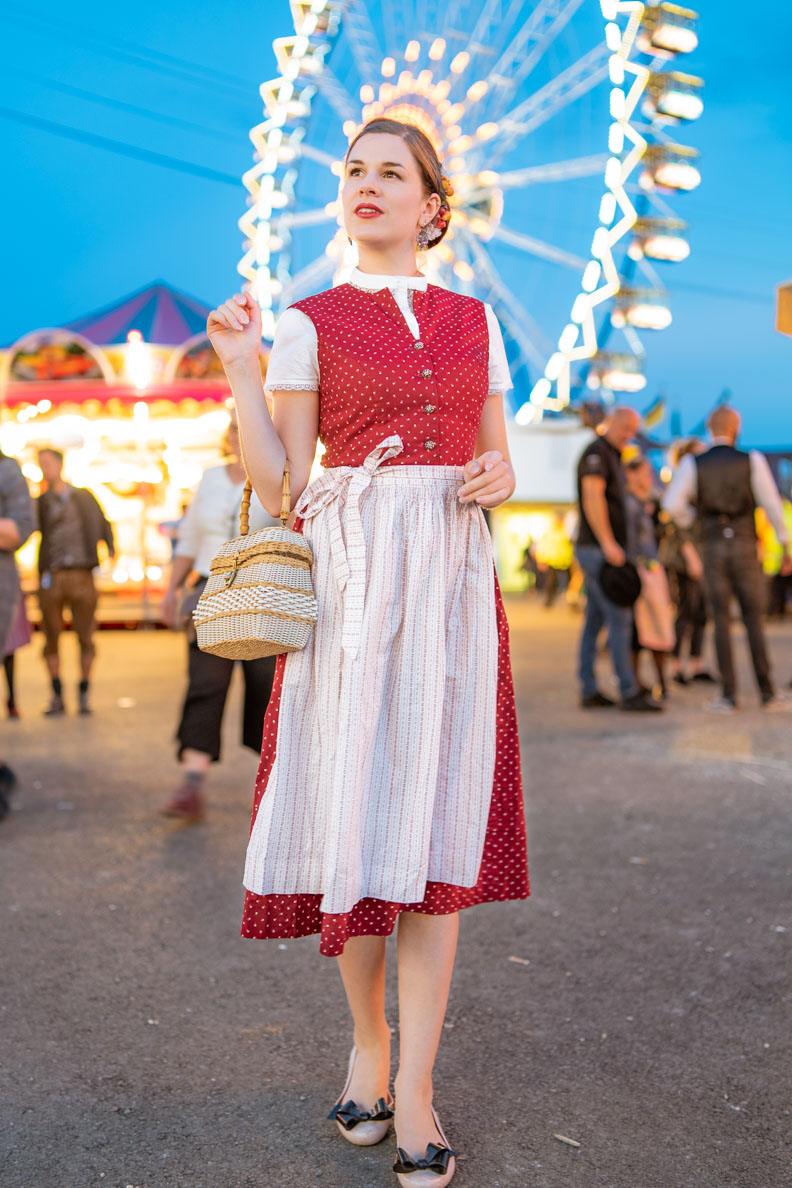 But can we still wear Dirndl nowadays?

After knowing the story of the Dirndl, the question if we still can wear such a piece of clothing arises. I believe, everyone should wear whatever he or she wants. So if you like, put on a Dirndl and go to Oktoberfest. However, it is also important to remember that the Dirndl already got misused and instrumentalised during NS era. So let’s make sure that something like this is never going to happen again. At the moment, some very conservative German politicans, some of them are obviously from the Right, show themselves in Tracht. I definitely dissociate myself from them.

It’s a fact, by the way, that you are more traditional, if you wear your festive clothing to Oktoberfest than a Dirndl. 😉 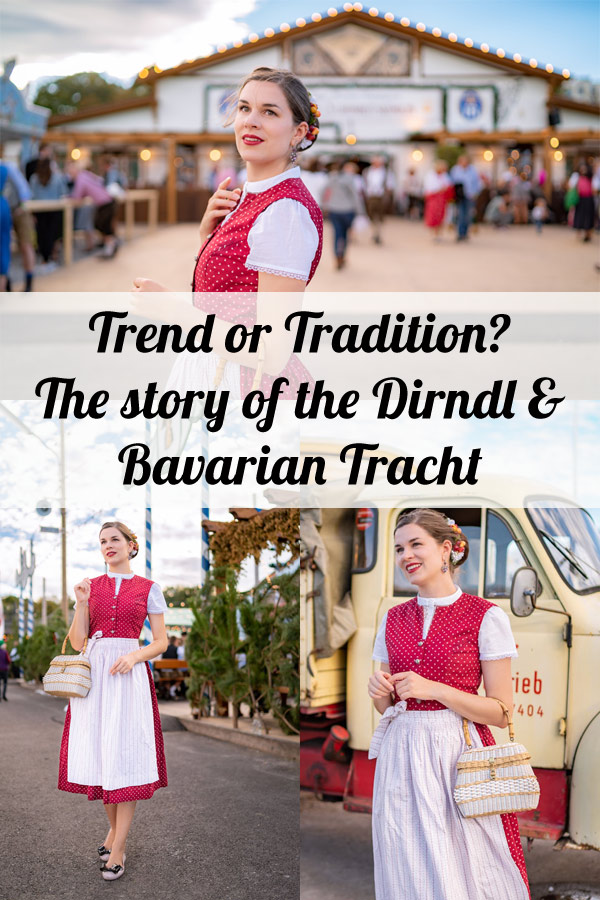 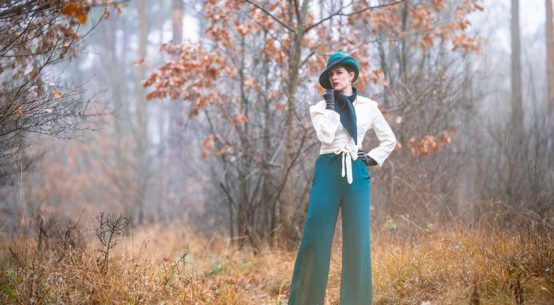 Trousers & a retro Outfit, or: What happened when women started to wear Trousers 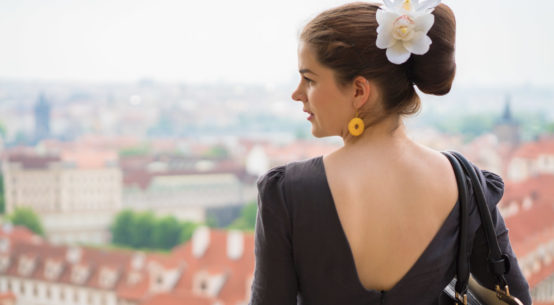 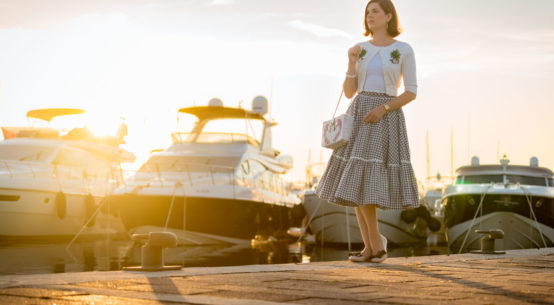 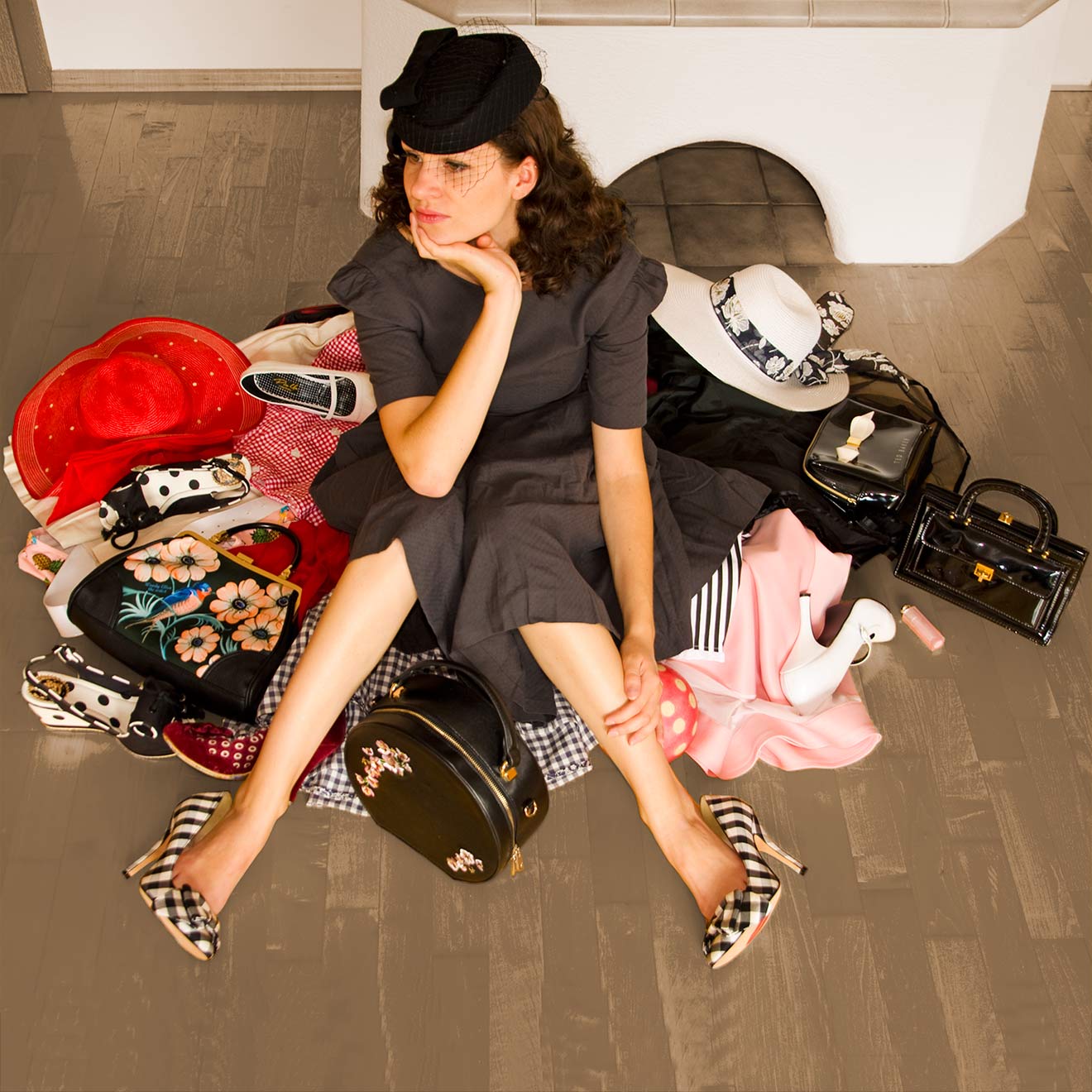 6 thoughts on “Trend or Tradition? The Story of the Dirndl & Bavarian Tracht”