Comfortable, practical, but still stylish: Capri trousers (or capri pants in the US) are a perfect choice for several informal occasion in spring and summer. In this blogpost, I want to tell you how this piece got from a provocateur to a fashion classic and of course I show some different outfits with capri trousers. 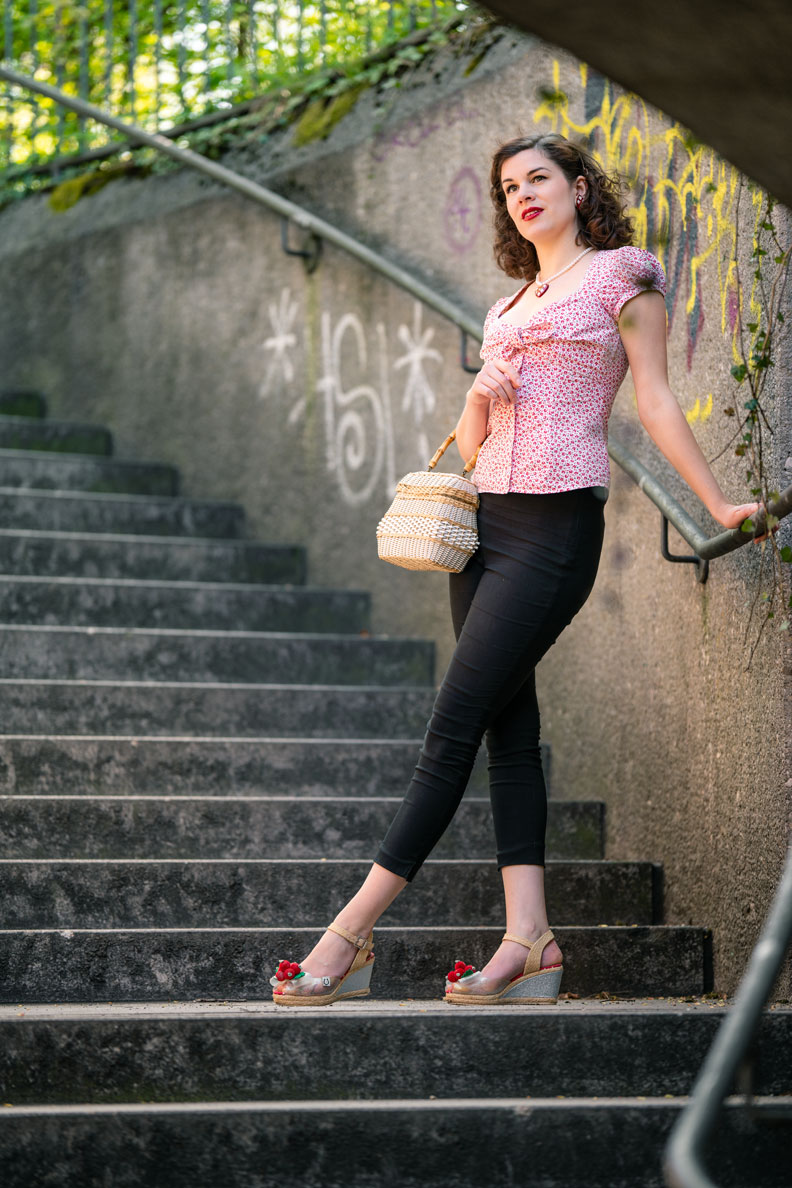 Capri trousers, also known as three quarter legs, capris, or pedal pushers are three quarter long, fitted trousers. Usually, they have a slotted hem, which makes it easy to turn them up. Capris classically end somewhere between the knees and ankles.

Classic capri trousers are waist-high, without any pockets, and made of cotton or linen. However, nowadays they are available in a lot of different form and fabrics. No matter if denim, single-coloured, or patterned, high-waisted or not, with or without pockets – everything is allowed.

The Story of the Capri Pants 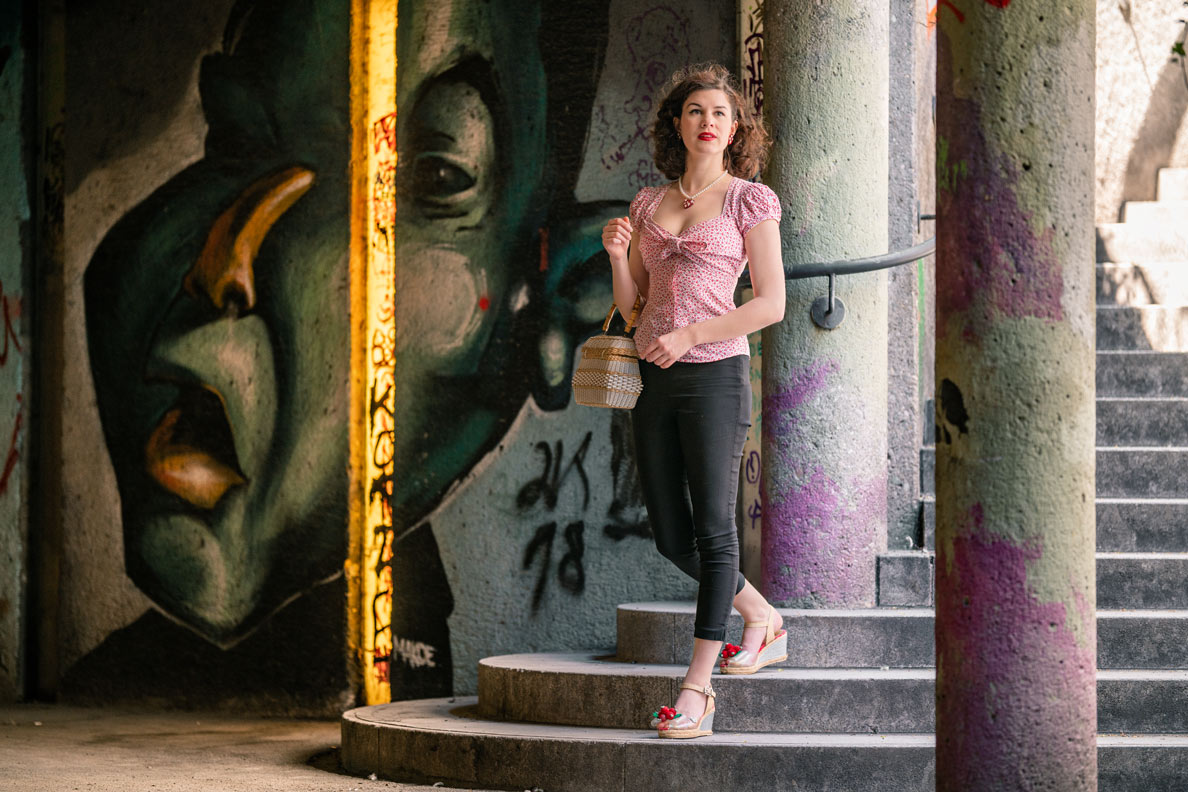 Sonja de Lennart, who opened her first boutique after World War II in Munich, cut her trousers to three-quarter-length during a walk at the beach in Italy, so her trousers legs didn’t got wet. A slot at each hemline and the new trousers were born. Such a revolution!

Some mothers even forbid their daughters to wear capris or only allowed them as leisure and/or beach wear. They definitely weren’t allowed in offices for a very long time, and a German actress (Senta Berger) even got refused ot enter an hotel as her elegant suit was seen unseemly. So maybe this scandalous conception of capri trousers made them that interesting for young women.

Althoug Sonja de Lennart invented the capri trousers and had to assert her design to her father, she didn’t received the recognition for her design she would have deserved.

Often, the invention of the capri trousers is still refered to Emilio Pucci. But he only copied Sonja de Lennart’s design and sold it in his own boutique in Capri, labeled as Capri Pants. Hubert the Givenchy, who made some designs for Audrey Hepburn, and later on Yves Saint Laurent, recived some recogintion as well. We usually don’t think about Sonja de Lennart, though, when talking about capri pants.

But how did those pant became that popular? This is most probably mainly due to the very popular wearers.

How Actresses made the Capri Trousers so popular

Already in 1949, actress Mady Rahl wore capri trousers in public. In 1950, Erni Mangold followed her. (Both of them were quite popular in Germany and Austria.) But it wasn’t until style icon Audrey Hepburn wore capris in movies like Sabrina and her private life that these trousers got popular all around the western world. Marilyn Monroe, Sophia Loren, Katharine Hepburn, Ava Gardner, Doris Day, Brigitte Bardot, Grace Kelly, and Elizabeth Taylor are just some more examples for popular acctresses who followed her example and loved to wear capris. Especially the combination of scandal and popular wearers made the capri trousers a must have and fashion classic of the 1950s.

And when noone else than Jackie Kennedy wore her very first pair of capri trousers with pleats in public, the capris also reached the upper class.

The Capri Trousers: A Fashion Classic from then until now 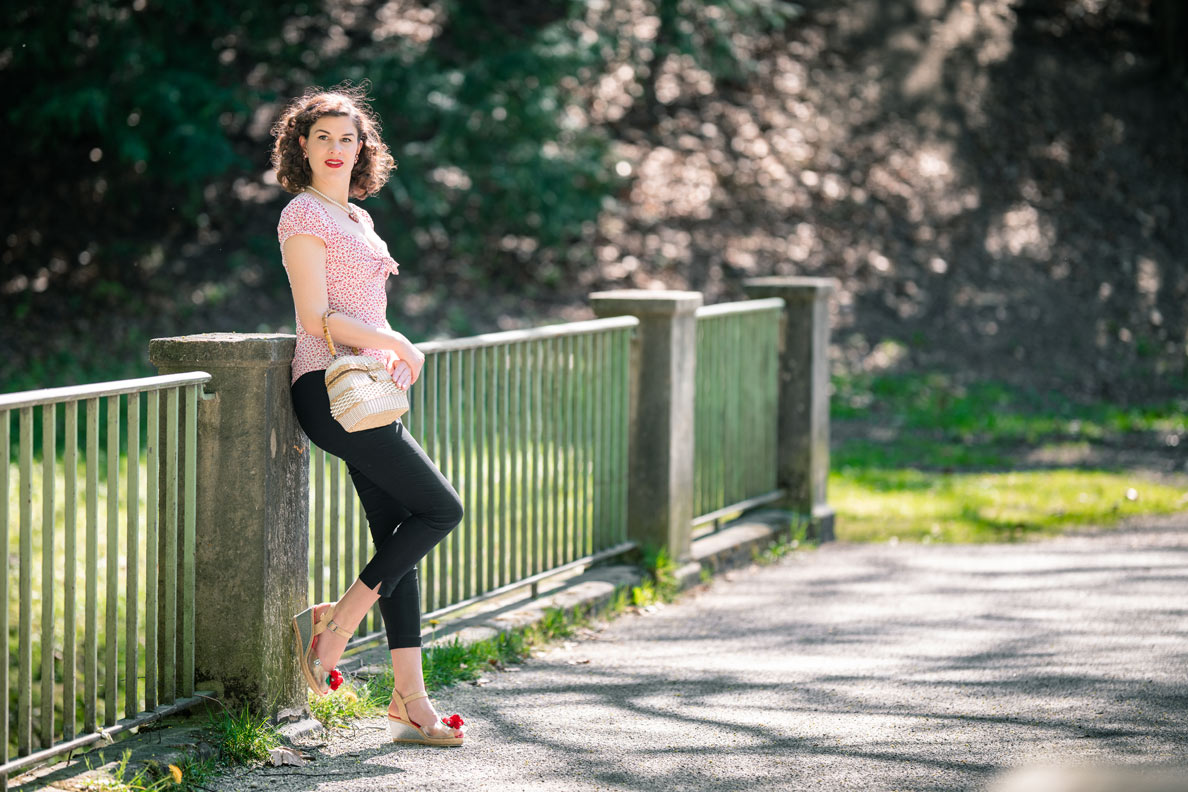 Even though capris definitely had their heyday in the 1950s, they were still very popular in the 1960s. In 1978, they had another big appearance in the movie Grease. Afterwards, it seems like they had a little break and were mainly worn as sports wear. But they celebrated their huge comeback in 1994 with Uma Thurman wearing them in Pulp Fiction (Quentin Tarentino). They experienced another in revival in 2002 and are back on the runways in this season, as I already told you here.

How to team Capri Trousers & what to keep in Mind

It is often said that capris are only for lean and tall women. This is definitely not true, though. With keeping just a few things in mind, capri trousers look great on every women and body type.

You can shop great vintage inspired capri trousers at TopVintage or Amazon, for example.

In the following sections, I’m going to finally show you different outfits with capri trousers. 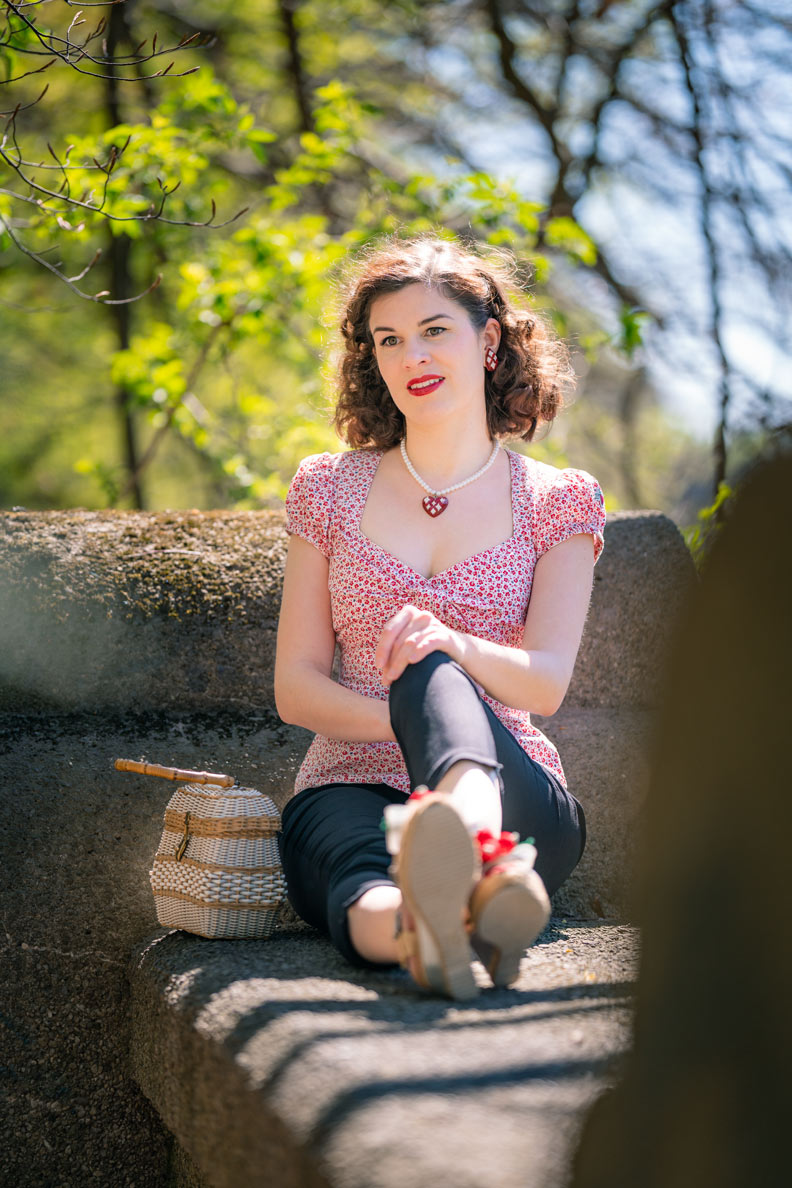 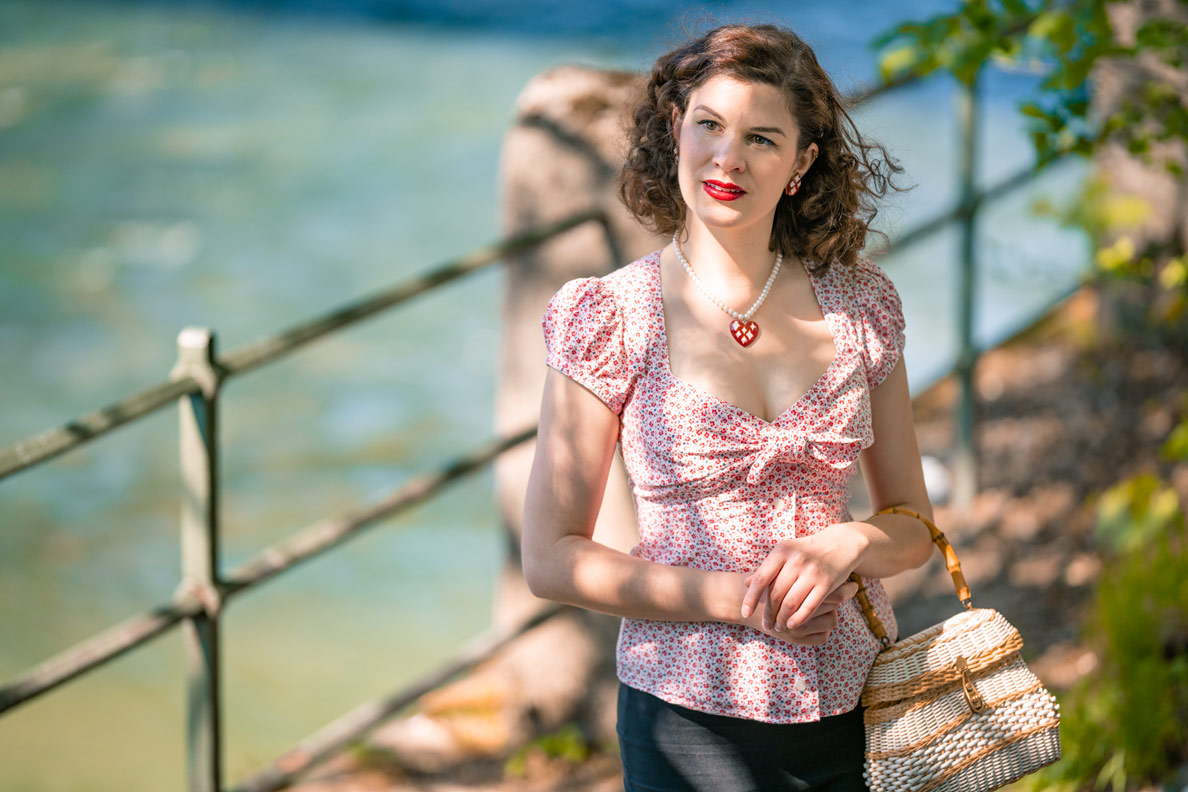 Capri trousers go very well with (summery) blouses. I already introduced you my trousers by Pretty Retro* in this blogpost, and this time, teamed them with a lovely blouse by Lena Hoschek. Wedges, a basked bag, as well as some sugary retro jewellery by Glitter Paradise finish this 50s inspired summer outfit. 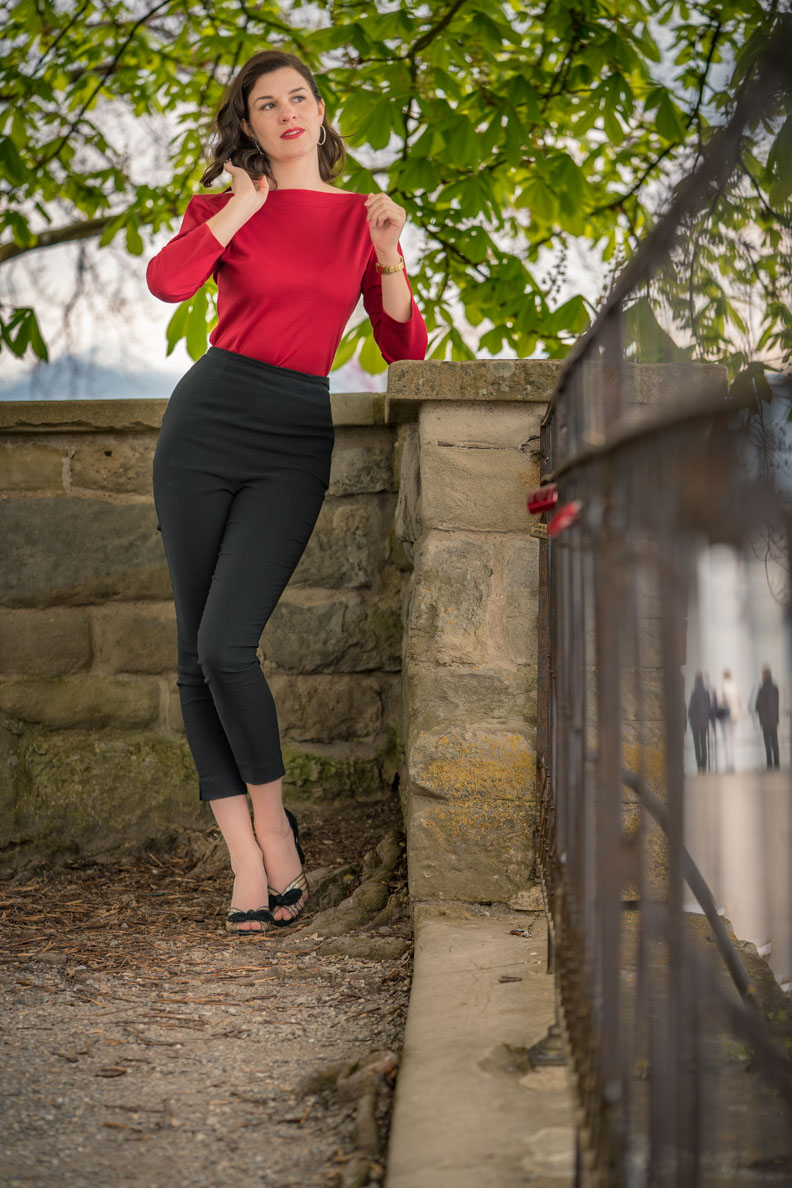 In combination with a simple sweater or top, capri trousers look casual and are absoutely perfect for everyday life. For a retro silhouette, I tucked my top into the capris and teamed them with lovely retro pumps. Plain jewellery finishes this casual daytime outfit. 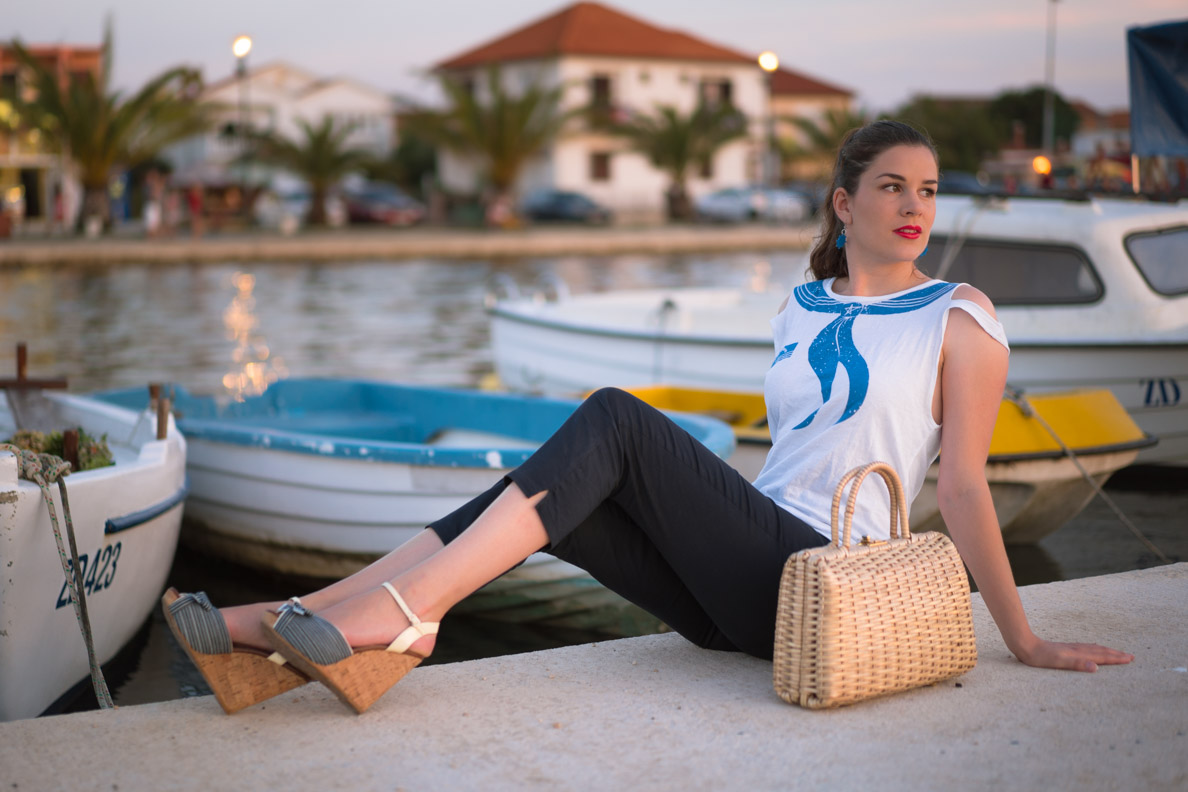 Named after the inventor’s favourite desitination, of course capri trousers look amazing when styled nautically inspired. For this relaxed outfit, I went for navy blue capris in combination with a sailor top, wedges, as well as a basket bag. 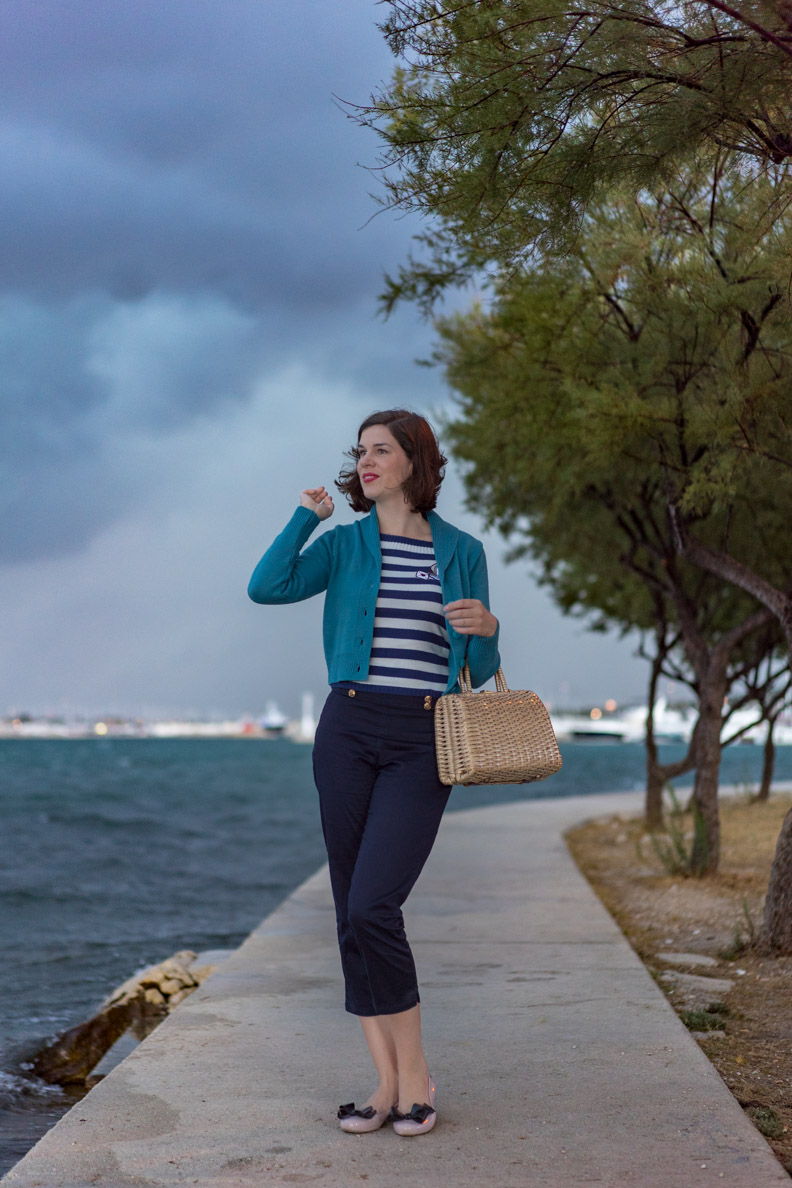 When it is getting a bit colder outside, capri trousers can easily be teamed with a warm knitted cardigan. Due the different shades of blue and the striped top, this outfit looks nautical inspired as well. Ballet flats make it very comfy and are perfect for a long walk (at the sea). 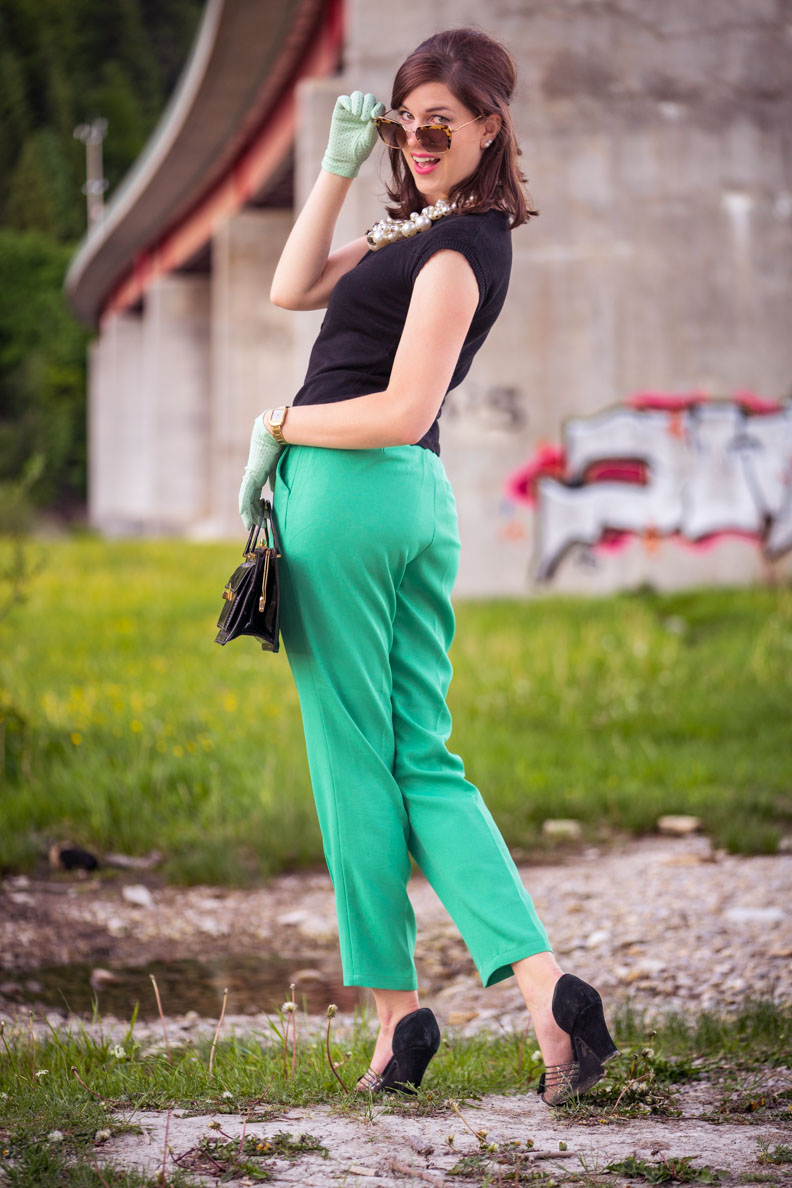 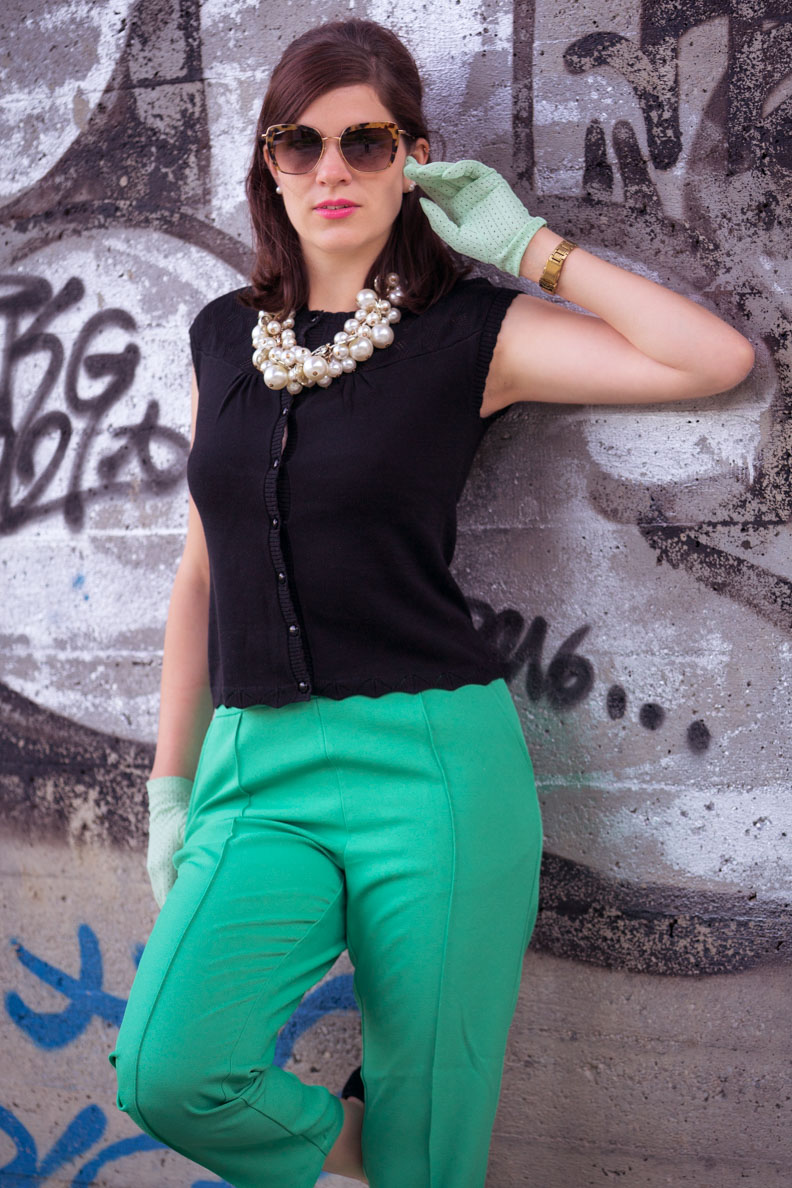 The terms pleat-front trousers and cool doesn’t seem to go very well together. If those pleat-front trousers have “capri lenght” and an amazing bright colour, though, they definitely can look cool. I teamed them with a short-sleeved cardigan, big sunglasses, a fancy pearl necklace, as well as elegant shoes. A perfect outfit for everyone who prefers a more stylish and extraordinary look.

And now, I’m curious: Did you know who invented the capri trousers? Do you like to wear them as much as I do? And which one is your favourite outfit? 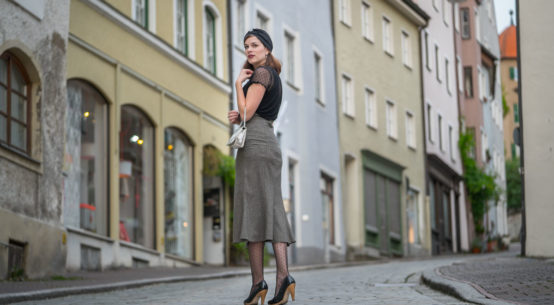 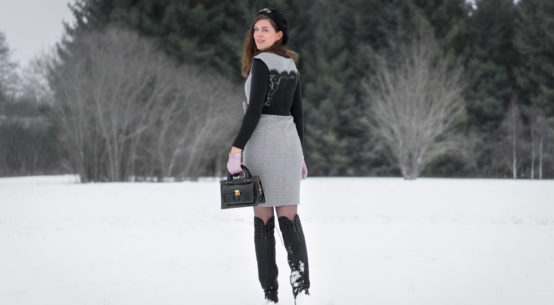 Modern meets Retro: Over-the-Knee Boots by Beyond Skin and a classy Shift Dress 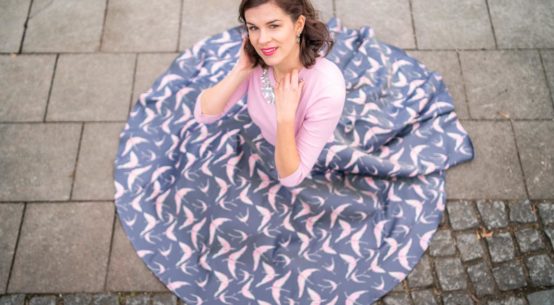 Fashion Classic of the 1950s: The Story of the Circle Skirt 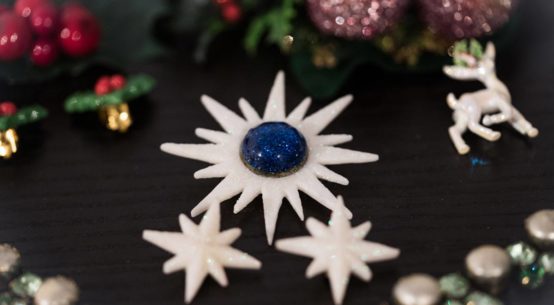