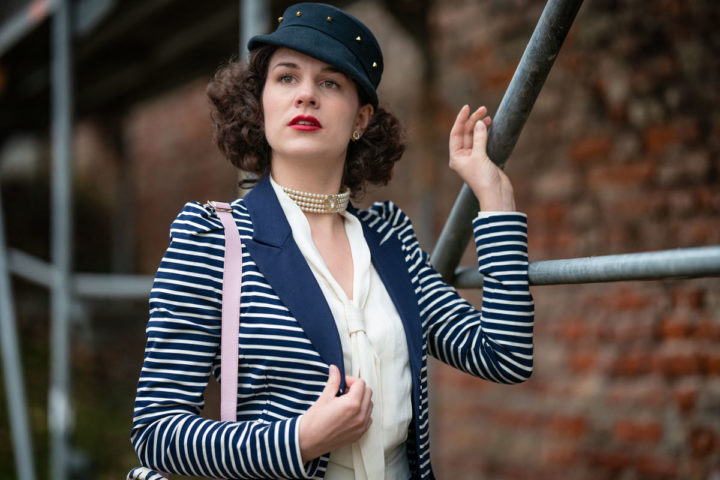 The story of the nautical look & styling tips

The nautical look is super classy. It is worn by both, men and women, and always reminds me of holidays, the salty sea air, and a sailing trip. Furthermore, this style looks simple, relaxed, but still kind of elitist. All these were probably the characteristics that made Coco Chanel fell in love with the maritime fashion, while she was on vacation in Deauville, Normandie. But where does the maritime/nautical look actually came from? When did it come into fashion for all non-seafarers? And how can this look be styled? I’m going to answer all those questions in this blogpost!

What is maritime and what is nautical?

In short, the adjective maritime is related to the sea or sailing, while nautical is involving or relating to ships, shipping, or navigation. So in fashion, we actually can use both adjectives to describe a style inspired by the seafarers. During my research, though, I got the feeling that the word “nautical” is used more often than “maritime” to describe this kind of style. 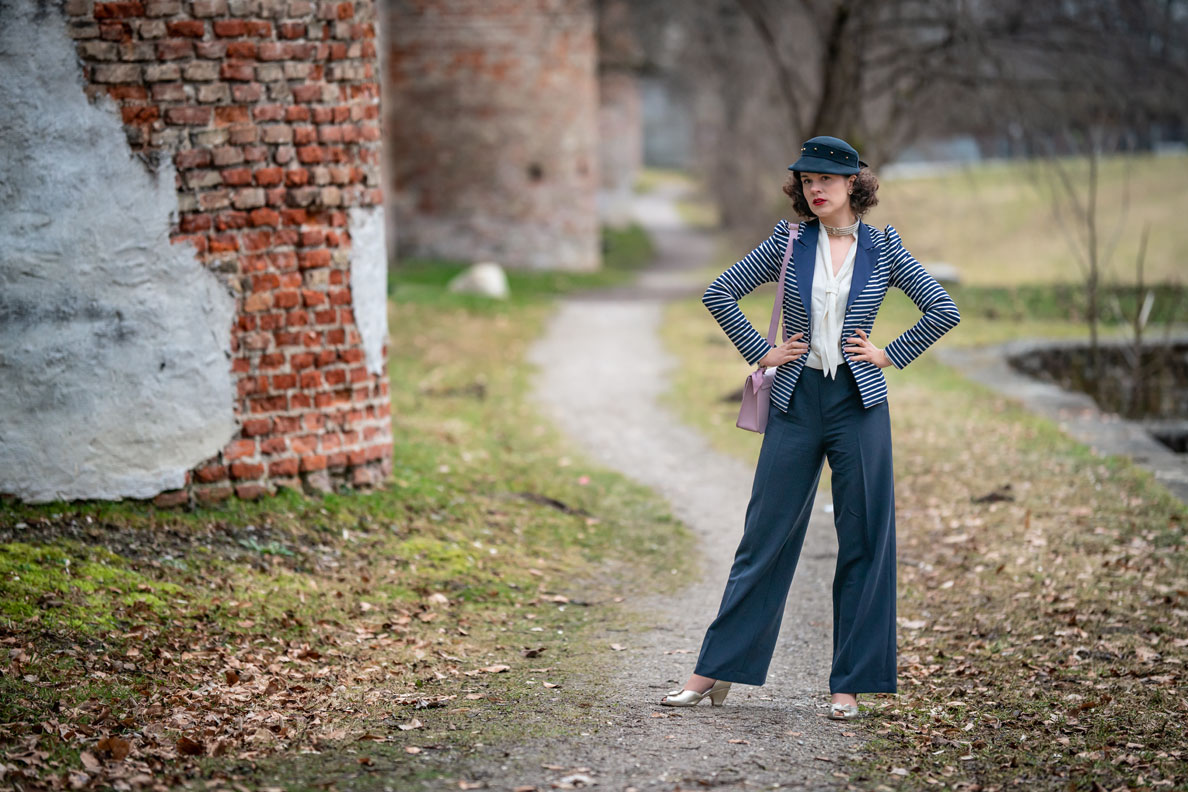 The Story of the nautical Look

A kind of maritime look aroused in different forms on different continents. The first nautical looks can be dated back to the 15th century. Back then, the clothing of seafarers usually consisted of a kind of loose sweater and long, wide dungarees with a bib, sometimes also called “Matelote”.

Although the Royal Navy gave their seamen clothes – like linen jackets, cotton trousers, shirts, shoes, and so on – for the first time in 1623, it was only in the 18th century the first regulations about the dress code of sailors were made in some nations, like a blue jacket, light blue vest, white trousers, and blue socks, for example.

Around 1830, the first navy blue sailor suit as we know it today got introduced. It was made of long trousers as well as a shirt with a flap collar. This collar was actually not meant to be decorative, but should help to protect the shirt from attrition through the ropes. 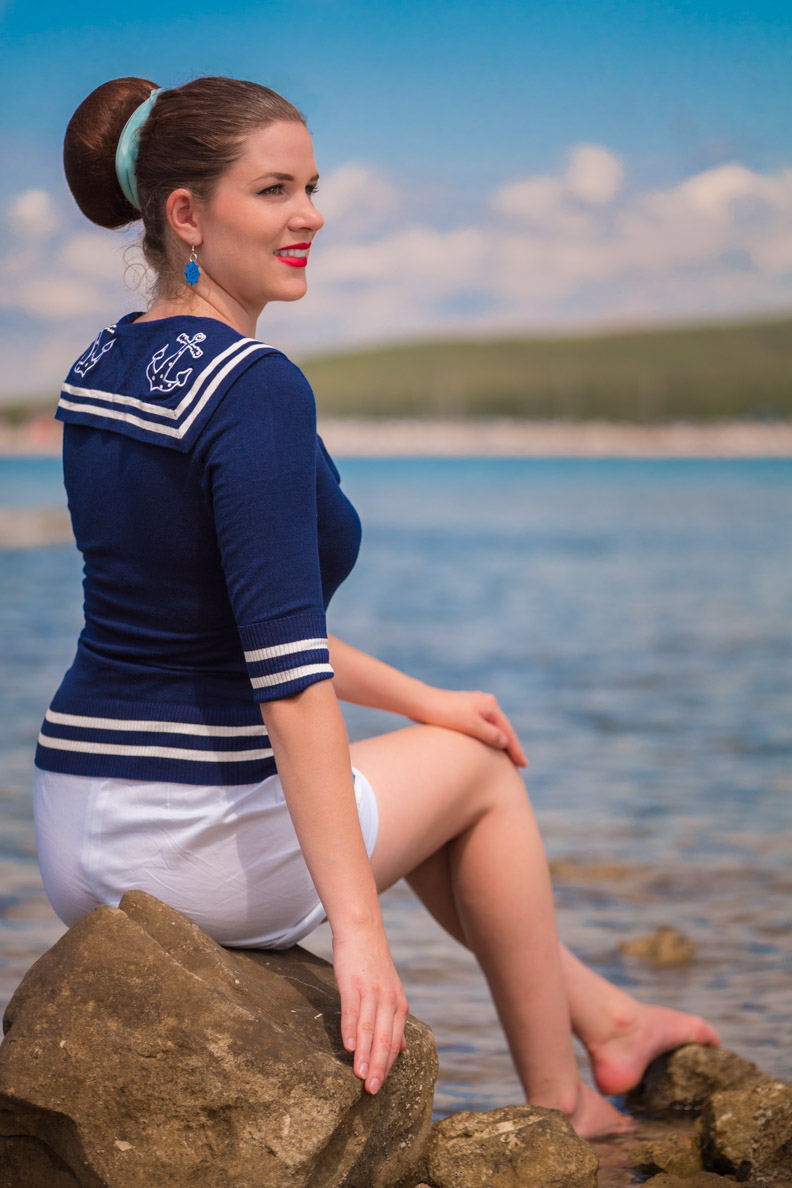 In the middle of the 19th century, the exact outfit of the French Navy sailors was defined. The striped shirt “the marinère” was worn as a vest and had to have exactly 21 white stripes. It is said that with this, they want to remember the 21 victories of Napoleon. But there are different versions. Others claim the stripes are inspired by the sea, and some say it is easier to find sailors that went overboard when they wear stripes. Fishers from the Bretagne wore the striped vest as well.

The sailor suit of the Royal Navy was first introduced in 1857, and has been adopted by many navies from around the world. Some say the three stripes on the collar of the navy suit should commemorate the three victories of admiral Nelson against Napoleon. However, this is most likely only a legend. 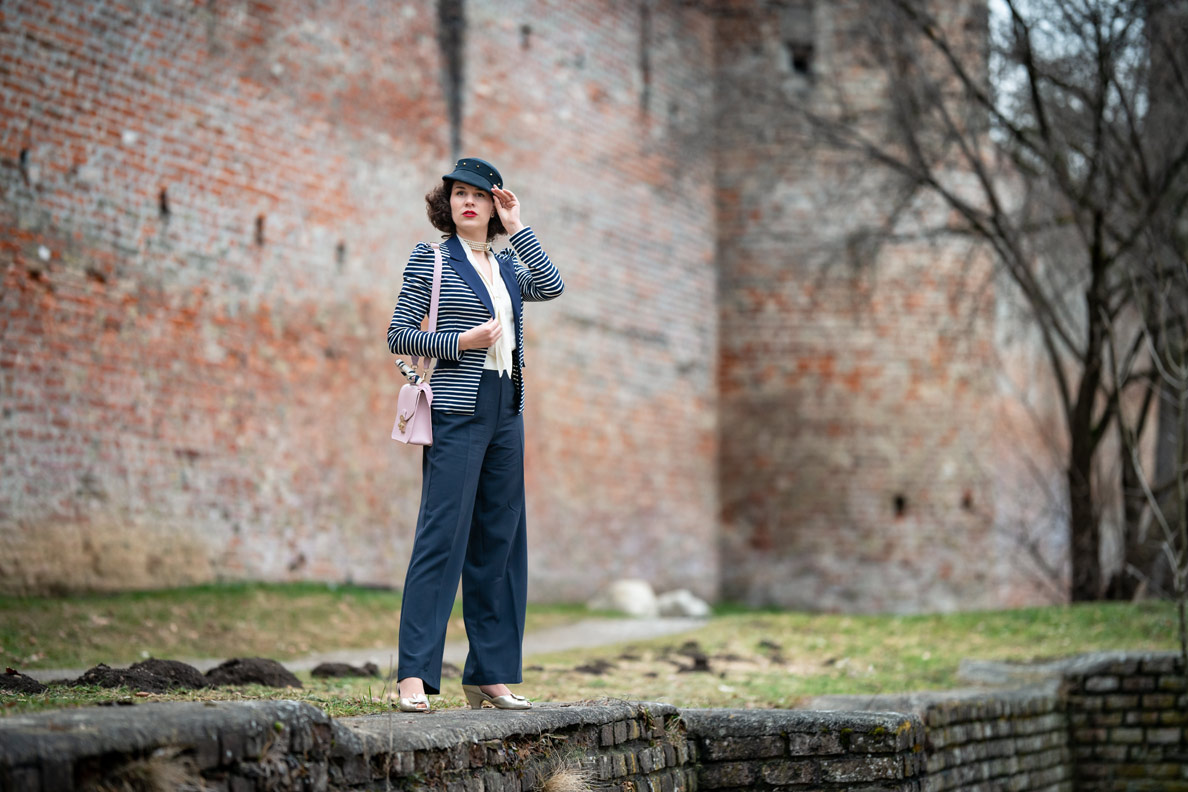 How the nautical Style sailed into Fashion

What the influencers are nowadays used to be the aristocracy in the past. Back in 1846, Queen Victoria had a sailor suit made for her four-year-old son Albert Edward, Prince of Wales. He wore this scaled-down uniform in the famous portrait done by Winterhalder. And if prince Albert wore a sailor suit, then other parents wanted their children to wear a sailor suit as well. So in the 1870s, the sailor suit had become a normal dress for young boys and also girls all around the world. Some schools in Japan, for example, have adopted the sailor suit as a school uniform, which is still worn.

At the beginning of the 20th century, it came into fashion to spend the vacations at the beach. And this was how the nautical look not only found it’s way into beachwear, but also to Coco Chanel. 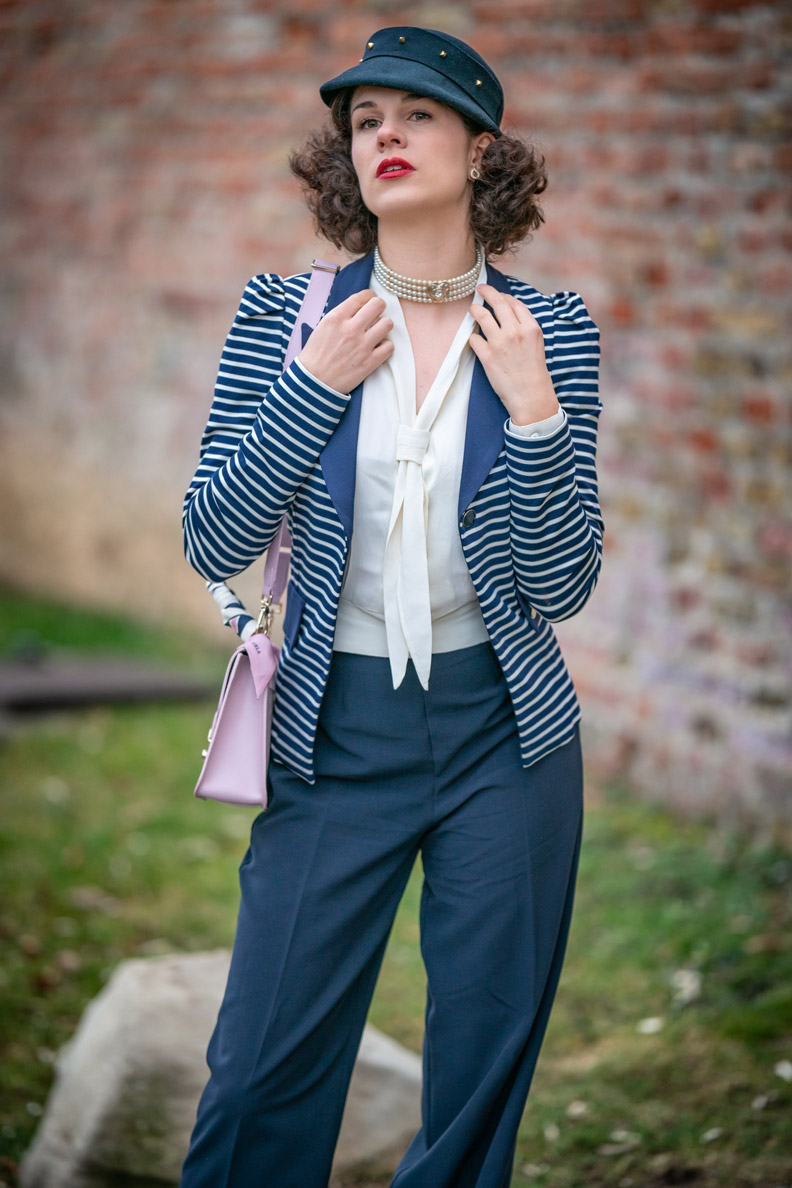 Coco Chanel and the nautical Style

Even though the nautical style was already worn by people from different social classes, it was Coco Chanel who helped to make this style very popular. Mademoiselle Chanel loved to spend her vacations in Deauville, France. There, she fell in love with the striped shirts of the fishers and wore it by herself in combination with wide trousers as well as a beret. Around 1913, she showed a striped silk shirt in her collection.

Since then, the nautical look not only captured the runway, but also got a kind of symbol for the French chic. The “Breton Shirt” was and still is worn by artist, bohemians, and intellectuals. No matter if Picasso, James Dean, Marilyn Monroe, Brigitte Bardot, Audrey Hepburn, Madonna, Kurt Cobain, or Duchess Kate, they all showed themselves in the striped, nautical shirt. 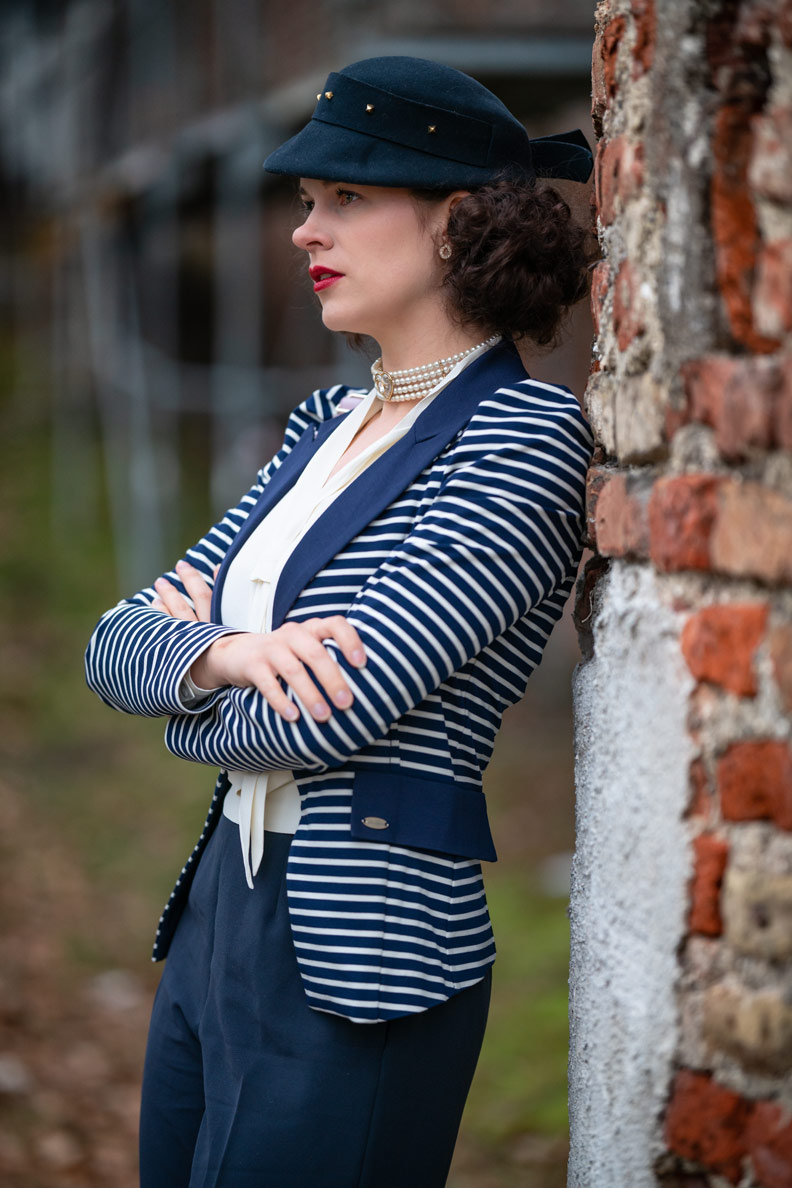 Nautical Fashion in the modern World

In Germany, the nautical look was seen as decadent during the NS time, and therefore got out of fashion for the “normal” people (not for the navy seamen, of course). In the 1950s, though, the nautical style came back and was especially popular in casual wear for adults. The cheeky girls of the 50s teamed the striped shirt with shorts (which, by the way, looks still great ;-)). Since then, the nautical style has never been really out of fashion. Jean Paul Gaultier, for example, showed many different nautical inspired collections and made the striped shirt to a kind of signature piece for him.

Other big fashion-design houses like Chanel also still like the nautical/maritime theme. It doesn’t matter if the nautical looks gets kind of alienated in form of mini dresses, turtle necks, or even evening gown, the origin of the blue and white stripes stays still obvious. 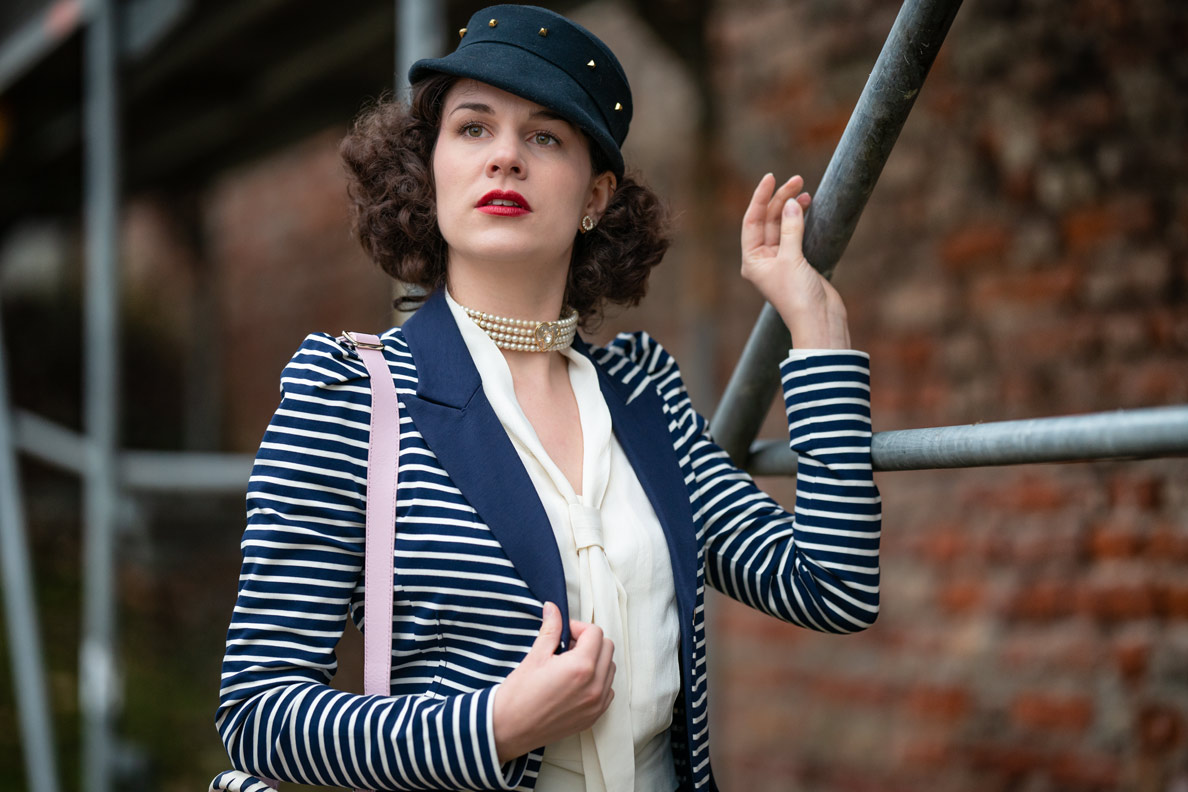 What makes the nautical Look so attractive?

The maritime look is comfy and relaxed, so simple, casual cuts play a big role. But of course, the colour navy blue is the heart of the look. Stripes are not a must, but always add a nautical flair to the outfit and remind of the French chic. If you really want to perfect the look, wear a cap or hat in white or navy blue.

All these features make the nautical look relaxed, but also very stylish. Of course, this style looks amazing at the beach, but also brings a maritime flair to all the metropoles of this world.

The nautical look is perfect for daytime, but with extraordinary accessories, you can also wear it in the evening. While creating a nautical look, I exceptionally recommend staying true to the style. Maritime clothes look best in combination with plain coloured accessories and garments in the colours blue, white, and red. A light pink, bright yellow or green are able to make the style look even fresher. Otherwise, I recommend to don’t experiment too much with colours and patterns. Extraordinary accessories, on the other side, are a great way to dress up the nautical look. 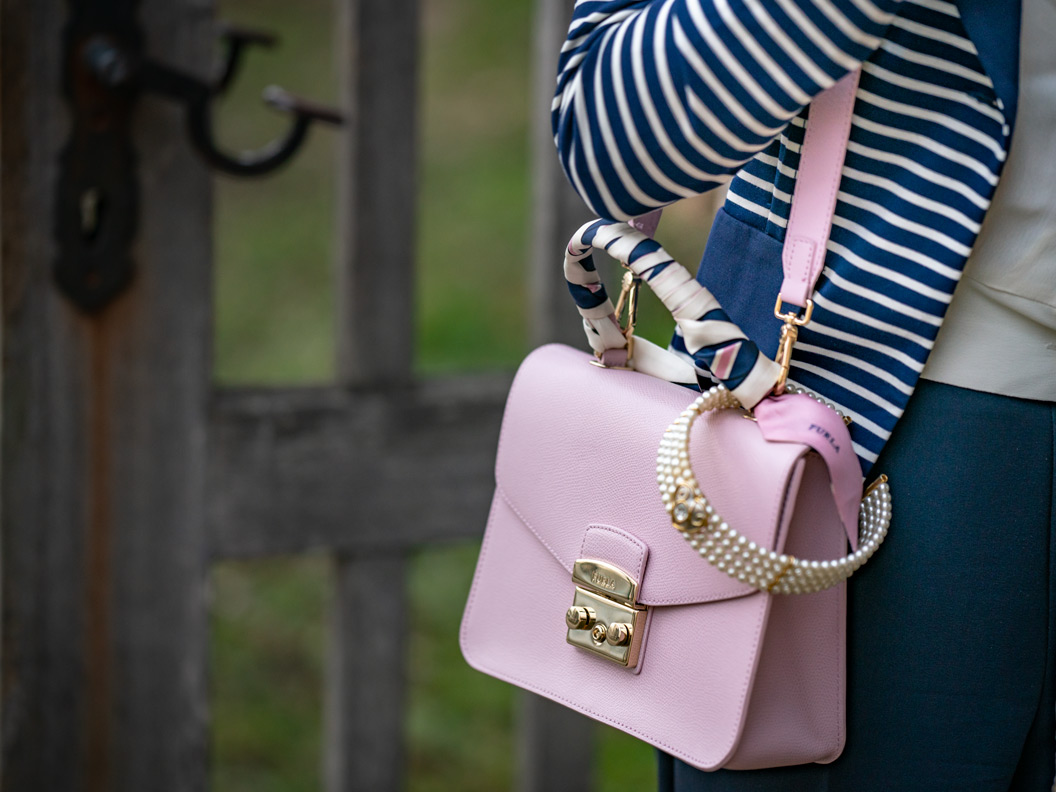 My nautical Look with a striped Blazer & white Blouse

While I created my nautical outfit, I got inspired by Coco Chanel. The bases of my look are navy blue swing trousers by Pretty Retro*, which I already showed you here. I teamed the trousers with the white Bonnie Blouse by The Seamstress of Bloomsbury*. The light Rayon Crepe de Chine fabric, the roll style collar with and the loop front are simply perfect for the maritime theme and kind of remind me of the sailor’s shirts.

On top, I’m wearing a jersey blazer with blue and white stripes. The cherry on the cake of this look is my navy blue vintage hat, though, which I bought in a vintage shop in Munich. For even more “Chanel” I’m also wearing a pearl necklace. However, I couldn’t resist a small breach of style, so I teamed the outfit with a light pink handbag and golden shoes. Red accessories would have been too obvious, in my opinion. 😉 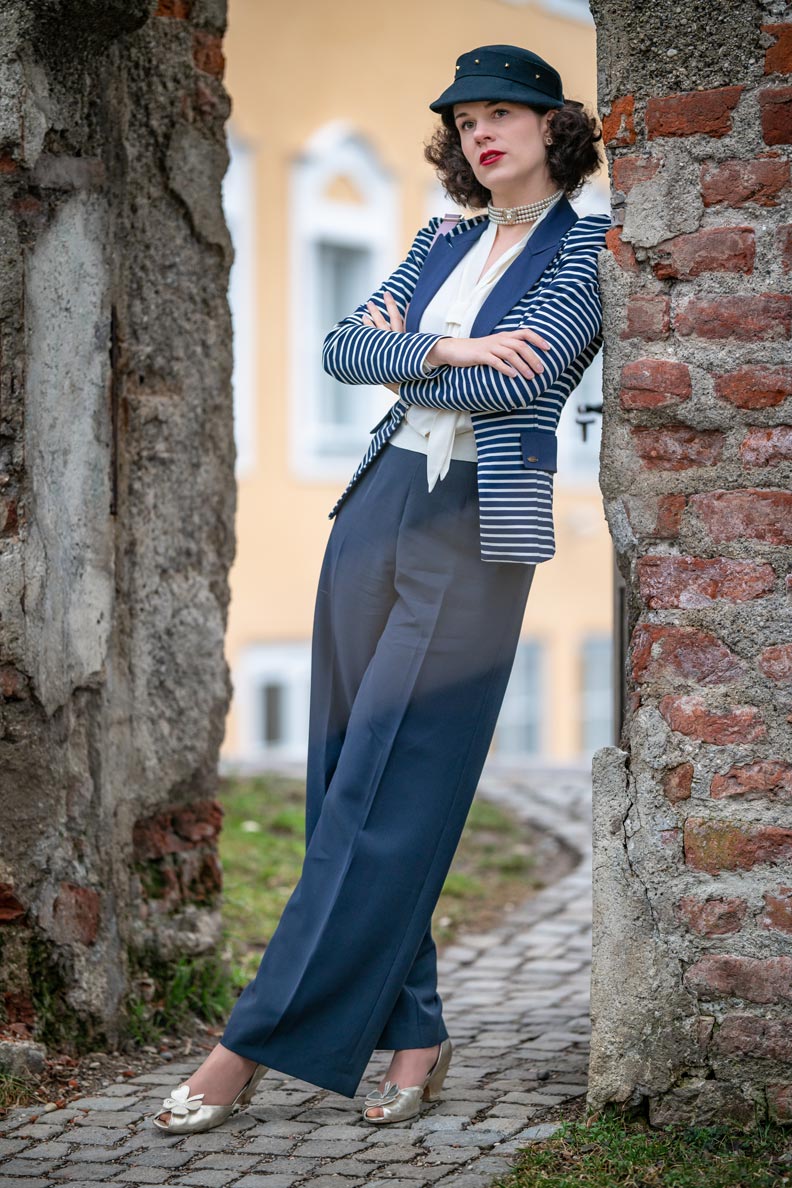 Hat: Vintage via Alexa’s, but maybe you like this one