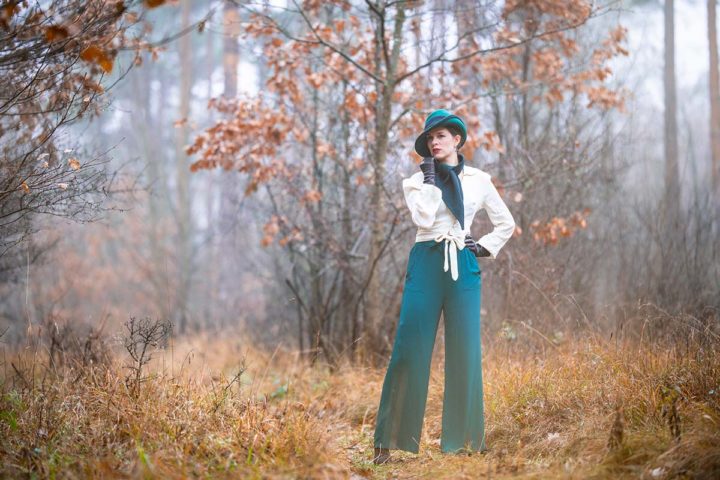 Looking around in the streets nowadays, you will almost only see women wearing trousers; skirts and dresses are an exception. About 100 years ago, this was completely different. For a very long time, women weren’t even allowed to wear trousers. If they wanted to wear trousers nonetheless, they needed a good cause and the permission of the police. In this blogpost, I’m going to tell you the story of the ladies’ trousers and of course I show you a matching outfit. 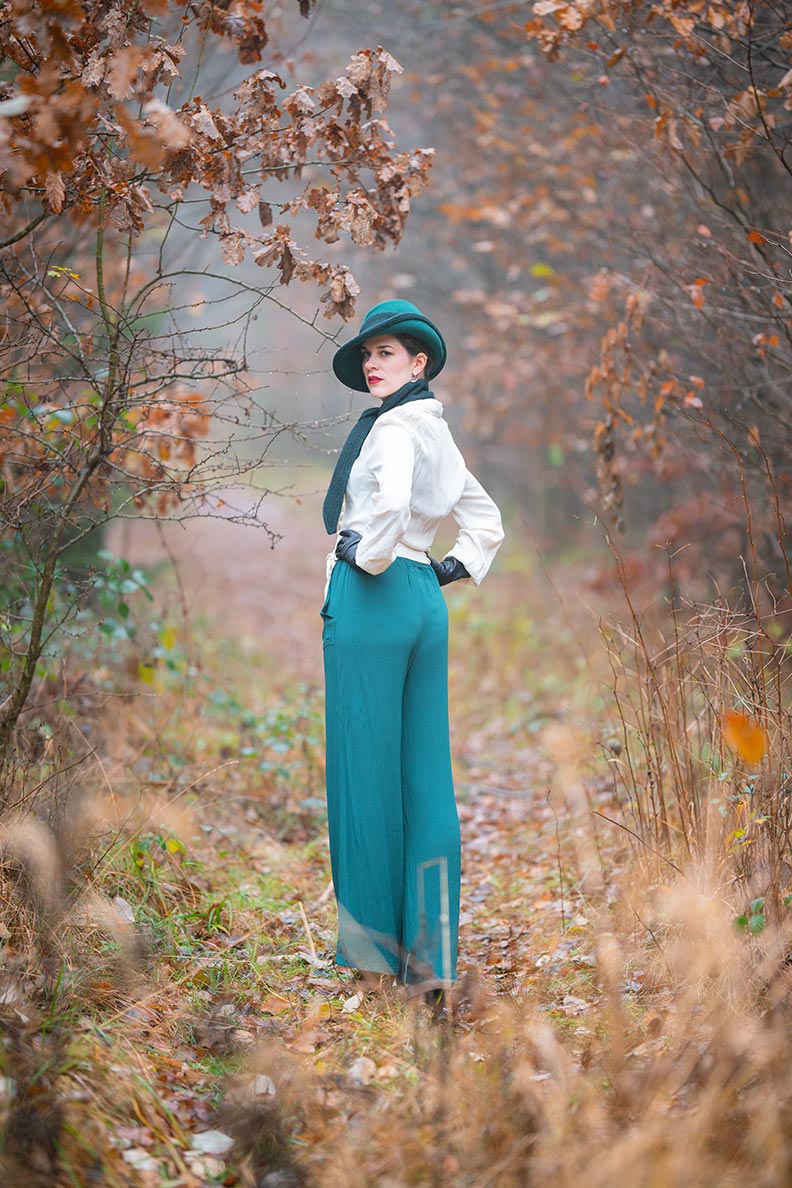 Although there is evidence for women wearing trousers in ancient times, afterwards, wearing trousers was for women of the European and American world a taboo, for a very long time. During emancipation movement, some women dared to wear trousers. One of them was the women’s rights and temperance advocate Amelia Bloomers.

Bloomers, also called the bloomer, the Turkish dress, the American dress, or reform dress take their name from just mentioned Amelia Bloomer. They were developed in the 19th century as a healthful and comfortable alternative to the heavy, constricting dresses worn by women druing this time. This kind of dress consisted of a shorter skirt, under which some kind of pants were worn. It also skipped the unhealthy and uncomfortable corset.

But although some women from the women’s rights movement wore this kind of clothing, the majority of the societey didn’t accept the Bloomers. It took some more years, until more and more women started to wear trousers.

Ladies’ Trousers on the Upswing

At the beginning, the were ladies’ trousers for sports activities, like skiing for example, and then, they sometimes were part of womens’ workwear. Around 1910, some fashion designer from Paris designed ladies’ trousers, the so called Jupe-Culotte, as an alternative to the Hobble Skirt (read more about this strange piece of fashion in this blogpost). Some women in Paris and London already wore the Jupe-Culotte, however, mostly for special occasion. Women in trousers on the streets still caused trouble.

This started to change during World War I. Women were forced to replace men in the workplace. As everything was scarce during war time, women mostly wore the clothes as men did before: overalls, uniforms with trousers, and so on. After the end of WW I, it was quite hard to stop women again from wearing pants. So in the 1920s, ladies’ trousers were still worn. Coco Chanel is just one example. However, they still weren’t an everyday piece of fashion for women. 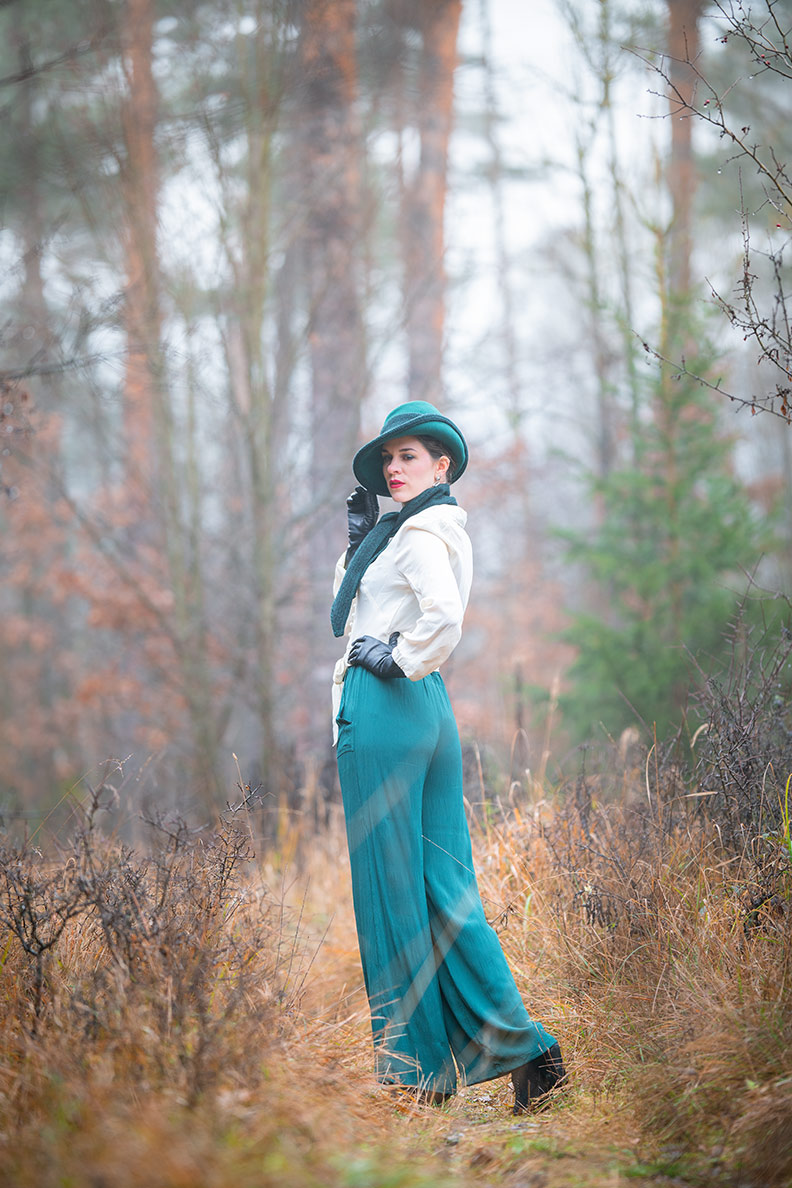 In 1930, Marlene Dietrich sang in the movie Morocco while she was wearing men’s clothing, what a scandal! But this was nothing in comparison to Marlene Dietrich wearing men’s clothes on the streets as well. So her style was called tacky. Oh what a difference 80 years can make: By now, Marlene is seen as a style icon and in Germany, we even call the kind of trouseres she wore (high waisted with a wide leg) “Marlene-Hose“, which could be translated with Marlene Trousers. Other female artists, like Katharine Hepburn and Greta Garbo, followed here example. But still, ladies trousers in everday fashion definitely weren’t usual. 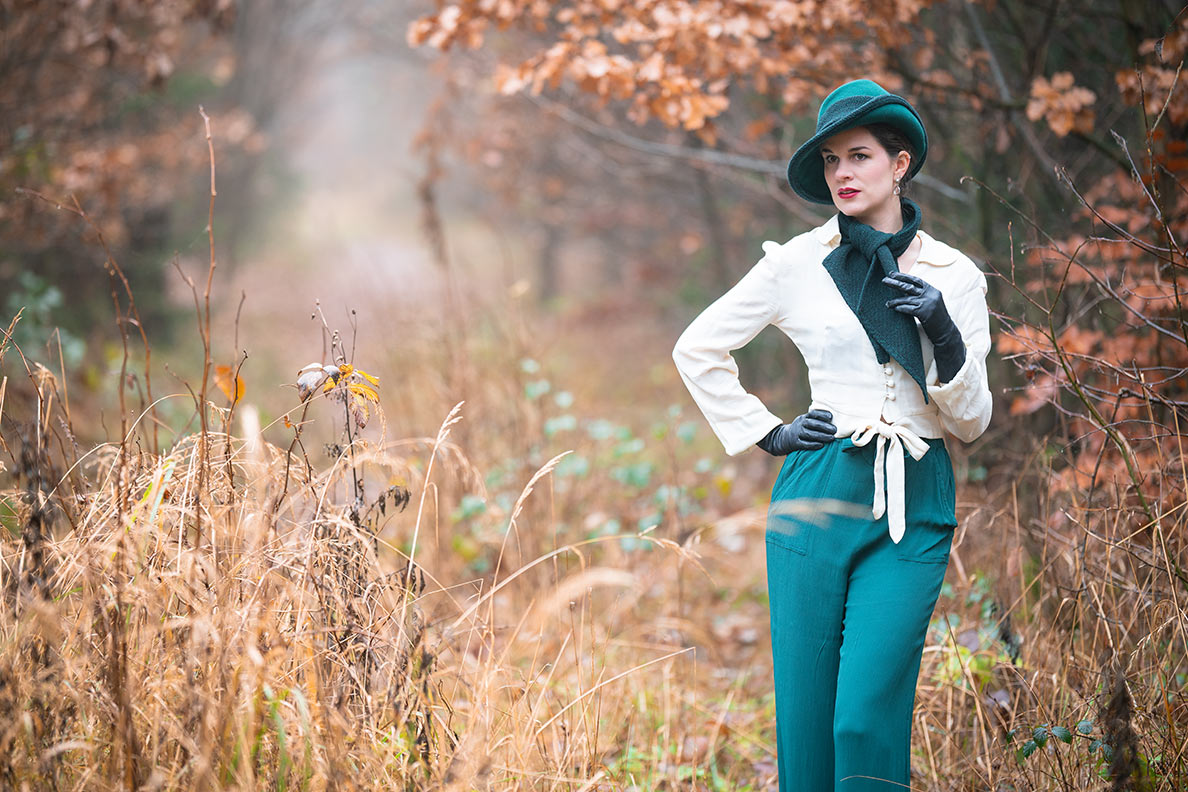 Ladies’ Trousers from the 1940s until now

During World War II, ladies trousers came back into fashion, for the same reasons as during World War I. But after 1945, society went back to old conventions in some parts, and many schools in Germany didn’t allow girls to wear trousers to school, for example. Skirts and dresses were still the preverred dress code for women. Nevertheless, in 1948 the capri trousers became very popular especially among the younger women. And although they still caused some trouble, they somehow became a fashion classic of the 1950s,

In 1966, Yves Saint Laurent showed a suit for women, which was another step towards the general acceptance of ladies’ trousers. However, it still took some more years until the trouser suit for women got completely accepted by society. In 1970, for example, the German politician Richard Jaeger said, he is going to ban every woman from the plenary session, who dares to wear trousers. At the 14th of October in 1970, the female politician Lenelotte von Bothmer resisted this declaration and gave a speech in the German Bundetag wearing trousers, which caused a protest.

But in the end, all the male protest did not help. As mentioned before, trousers have largely replaced skirts and dresses in everyday life as well as in working environment. Exeptions are high summer and often evening attire.

Fun fact: Only on January 31 in 2013, the law that forbid women in Paris to wear trousers in public was officially abolished. 😉

Although I personally generally feel better in dresses and skirts, I’m very thankful we are finally allowed to choose what we want to wear! Comments like “This is how women should dress [in skirt and dresses]”, which I sometimes receive under my Instagram posts are not appreciated!

Styling Tip: The Winnie Pants and a white Blouse

The beautiful green trousers I’m wearing in the photos called “Winnie” by the Seamstress of Bloomsbury are an absolute eye-catcher. I absolutely adore the high waist, the wide legs and the Crepe de Chine fabric. The front tie, as well as the pockets add that certain something and are also super practical. 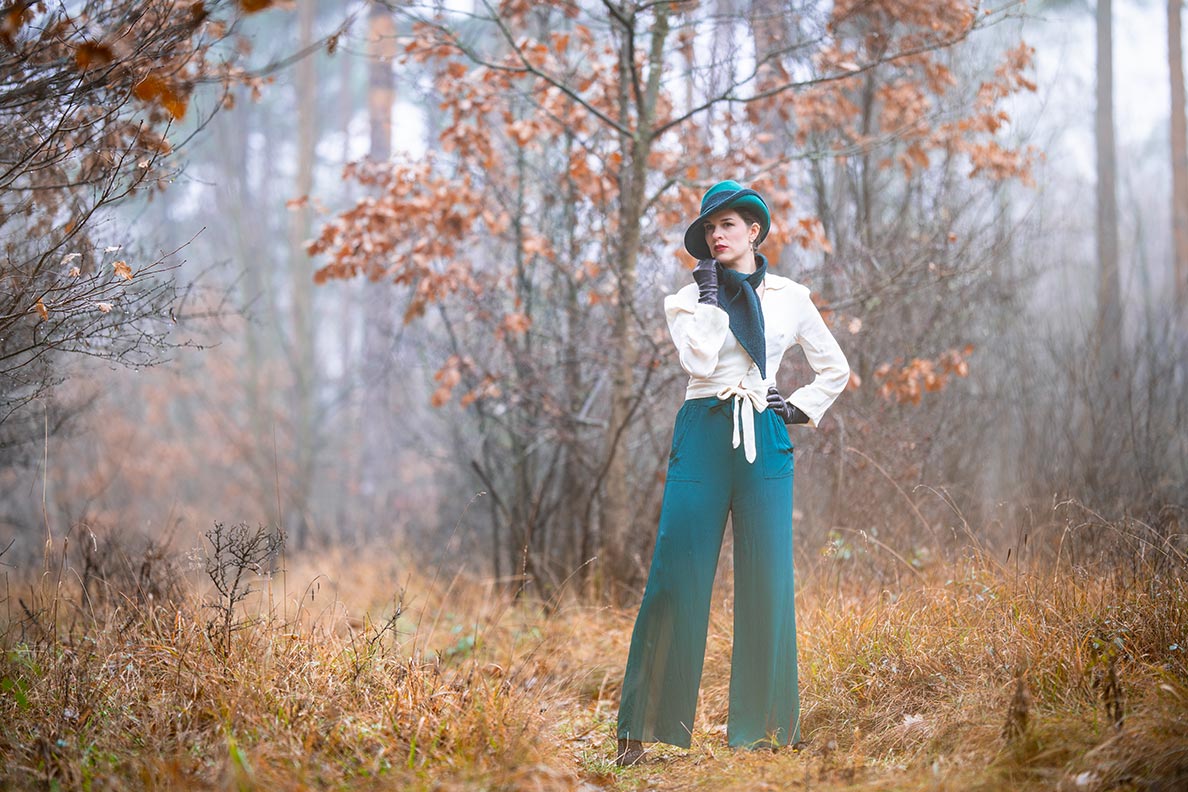 A white blouse is a classic and matches the trousers perfectly. Mine is by the Seamstress of Bloomsbury and due to its many details like the wide sleeves, the bow and a lot of buttons a very special piece. (PS: You maybe already know the blouse from this and this outfitpost.) To stick to the 1930s/1940s vibes of this outfit, I teamed it with matching accessories. My lovely hat and scarf, as well as a pair of vintage gloves finish this look perfectly. 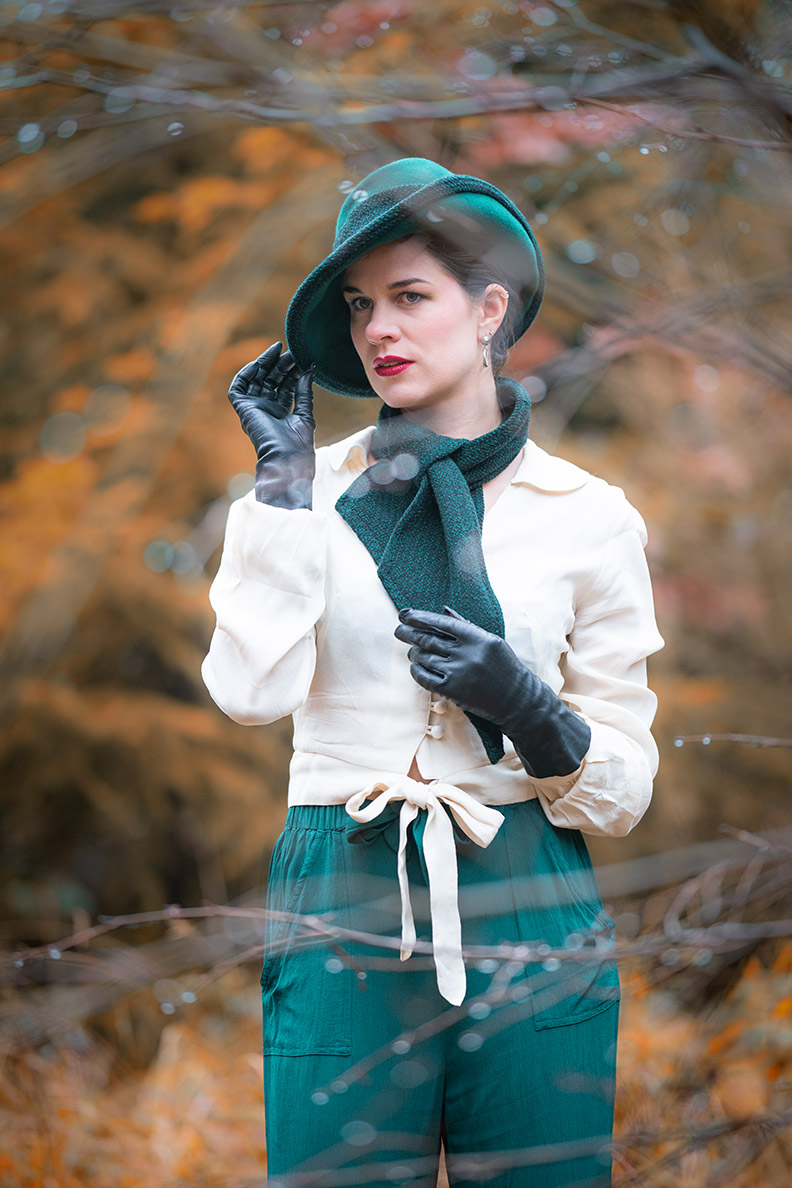 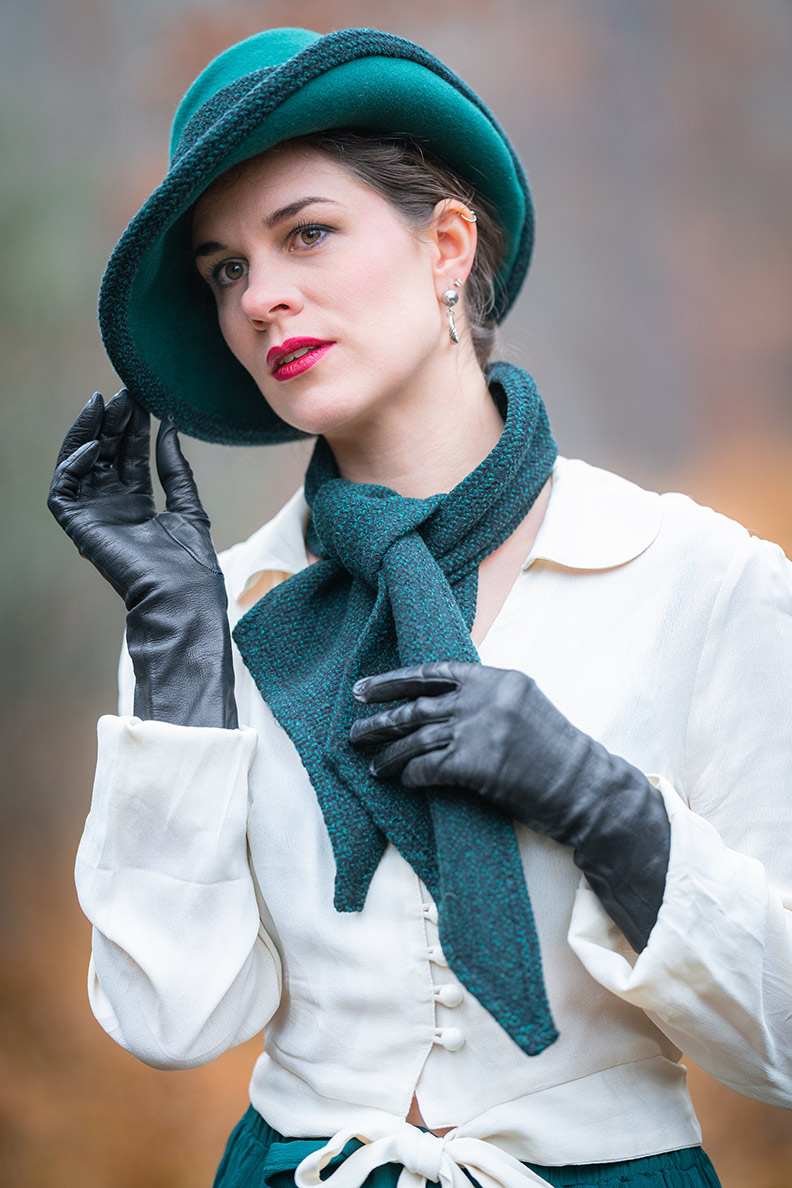